Miguel Caballero Rojo is a character who first appeared in Tekken 6. Miguel is a muscular tanned-complexion brawler, who has brown curly hair, a light unshaven beard, thick brown eyebrows and light brown eyes. Because his outfit resembles a typical bullfighter's suit, he has received the nickname of "Miguel el Matador" in Spain. 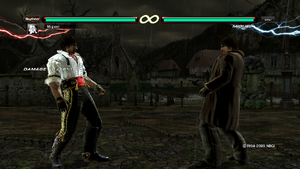 In Tekken 6, Miguel was given two new default costumes.

His 1P outfit is an outfit that resembles a Matador (bullfighter) costume. It consists of a white dress shirt heavily embroidered in gold, with its sleeves folded up to his elbows, black skintight pants with an embroidered gold pattern down its sides, and a wide red belt with the same embroidered pattern on its side. Finally, he wears a pair of black knee-high boots with black laces and golden patterns on its sides. His shirt is only half-buttoned, thus revealing a red scarf behind his neck, a silver choker, and his chest.

His 2P outfit is a coat that resembles a street fighter's clothes. It consists of a long brown leather coat with a fur collar, an unbuttoned gray dress shirt, and striped gray pants with a brown leather belt. Finally, he wears a pair of brown shoes. In this outfit, his inner shirt is very loose, thus revealing a silver necklace, and more of his chest.

The only differences are that the shirt's sleeves ared rolled up to his elbows and has black fingerless gloves.

Player 1 Outfit: Miguel's new outfit consists of an orange unbuttoned button shirt with the sleeves rolled up to his elbows and various logos,dark green jeans with logos on them,black belt and belt buckle and black fingerless gloves and black shoes. He also wears extra jewelry.

Player 2 Outfit: His button shirt changes to Green and his jeans change to black.