Apart from her trademark bob hair and busty figure, Anna Williams is known for her femme fatale personality and aesthetic. Unlike her sister Nina, Anna has a mature yet refined feminine style which consists of a red dress for each game. In later games, Anna later adopted an outrageous yet provocative style to accommodate her personality and the era of the game which consists of various distinctive pieces including a modification of her signature red dress.

Player One Outfit: At the age of 18, Anna fights in a red strapless red ankle length dress, featuring a bow on the back and a hip length slit on her left leg. An oriental design depicting an exotic and colourful bird standing atop a cherry blossom branch was embroidered across the right leg and the outfit was completed with brown tights, red stilettos and long red satin evening gloves. The bird later faces left in Tekken 5-onwards.

Player Two Outfit: Consisted of a blue palette swap of her primary costume.

Player One Outfit: Sees Anna return in the same costume with a minor alteration to the dress’s Asian design as it is reversed to face the opposite direction until Tekken Tag Tournament.

Player 2 Outfit: Once again a blue palette swap of her primary costume.

Player One Outfit: dress became high backed with the bow at the small of her back becoming more prominent. The dress sported gold edging along the lower seams and floral patterns on the skirt portion. Anna also wore a red ribbon choker with an emerald pendant around her neck.

Player 2 Outfit: Once again a blue palette swap of her primary costume.

Player Three Outfit: While her Player 2 costume remained a simple palette swap, she gained an additional third costume which can be unlocked when Anna is used more than 25 times. It also appears to be the first commissioned costume in the series, having been designed by manga artist Mamoru Nagano. Her third costume is a catsuit in white tiger fur/print with white fur trimmings running over the shoulders and ending at the lower back. A zip with a gold ring runs down the front of the outfit and it is completed with a gold collar and armlet, fur trimmed black leather gloves, open toe black platform slingbacks and a furry bowler hat.

Anna used the dresses used in Tekken 2 especially the Tekken 3 Mamoru Nagano catsuit, but gains a new costume which To select a certain outfit the player has to select the character with the proper button: 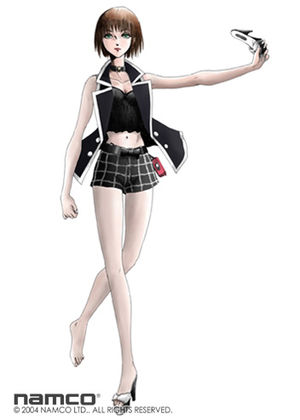 Player One outfit
While Anna retained her trademark dress as her primary costume, its design received a slight revamp and seems more influenced by the Chinese sleeveless qípáo with some western modifications. It features a traditional mandarin stand-up collar and a cleavage chest opening, a slit on the left side that is high to the waist, and the dress now covers her back entirely. The fabric seems to be brocade satin, featuring an oriental motif with floral designs, and the oriental bird design is embroidered more prominently towards the center of the lower half of the dress and was facing the left side just like Tekken 1. The length is shortened slightly to end above the ankles, and the bow tails at the back are longer. She wears brown rose lace tights and red ankle-strap pumps, and her long opera gloves are replaced with long lace fingerless ones that matches her tights.

In Tekken 5: Dark Resurrection, her Player 1 outfit is blue, in the same fashion to her classic Player 2 outfit. By luck, this outfit can still be red.

In Tekken 5: Dark Resurrection, her Player 2 outfit is colored in white except her stockings.

Player Three outfit
Anna also has an additional third costume, once again designed by Mamoru Nagano, which can be purchased from the customization menu. This outfit features a cropped black bustier and a black choker, a black hip length, sleeveless jacket with white trimmed lapels, black-and-white checkered shorts with a black bow clasp belt, she has a red cellphone dangling on the left of her shorts which resembles that of a Red Motorola RAZR or the Motorola Ferrari, and black platform heels with white furry straps.

Her shoes consists of black high slingback pumps with roses embossed on it with six wires decorated on it. She is wearing a three stranded silver necklace with a few silver stones and tassels with one sapphire on the third strand positioned in the middle.

In her (and Nina's) ending, the dress became red and she wore her 1P pumps and her stockings have the same lace seen in her 1P outfit.

Player Three outfit
12 years after Tekken 3, Mamoru Nagano's Zebra suit for Anna returned with slight modifications. The fur collar on the front is reinvented as it is coarse trimmed fur. The bowler hat is replaced with a faux fur pillbox/cossack hat, Because of the updated graphics, the gloves and platforms are made of patent leather. Her gold Egyptian necklace has two sapphires instead of emeralds. Anna is shown not wearing the gold armlet that goes with the necklace.

Anna has a variety of themes for her customizations: Nurse, Maid, Witch, Military, Gothic, Medieval, and Vampire.