His Player 1 outfit consists of a mostly yellow Capoeria suit with green running down on his left and right side of his top and bottoms. He has on a green wrist band and no shoes. His top exposes his lower abs and naval.

His Player 2 outfit consists of a purple sleeveless shirt with red on the sides, dark blue shorts, gray socks, and hot pink shoes with a horizontal black strip pattern. In this outfit he has black elbow pads, (most likely) a watch, and wears sporty shades.

His Player 3 and 4 outfits

Following the concept, of his Player 1 Outfit from Tekken 3, he loses the half shirt, and The yellow parts of his pants are Changed to blue, and the green parts are changed to white. He gains a necklace.

This outfit shows his Shirt changing to a magenta color with the sides changing to white instead of red. His loses the Elbow Pads and gains white wristbands on his triceps and wrists. Finally, his sunglasses are changed to White.

Eddy's Player 1 Outfit returns with a few changes: The wristbands are changed to white and the logo on his chest is changed to purple.

This is the only outfit in the game for Eddy since he is just a costume swap for Christie. This outfit consists of a violet opened jacket, black jeans, and teal shoes. 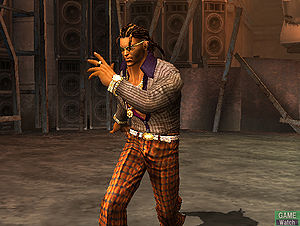 The same as his Tekken Tag Tournament Player 1 Outfit, except for the "Faisca" logos are bigger and the logo on his chest is blue.

This outfit consists of a light brown jacket with vertical dark gray stripes. It has a royal purple outlining going from his collar down to the unbuttoned section. He wears orange pants with several black outlining, making it look brown and brown shoes. A white belt is above his pants with a golden center. He wears more stylish shades than his Player 2 Outfit from Tekken 3. He also wears more gold in this outfit. (A watch, necklace, and his ring). 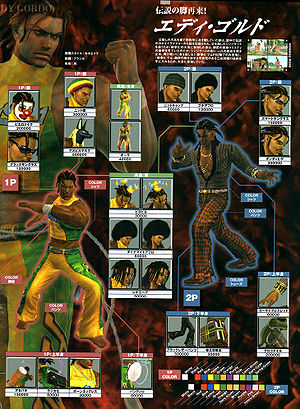 Both outfits with his customization 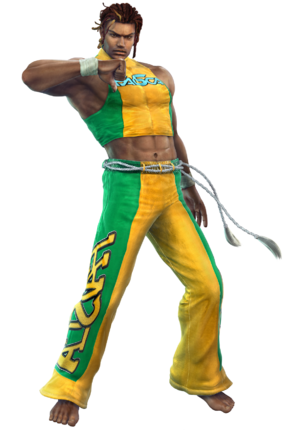 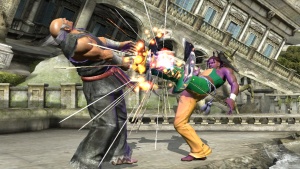 Heihachi vs Eddy in his Player 1