Emilie "Lili" De Rochefort is a Monegasque teenager with light gray eyes and long honey-blonde hair trimmed with straight bangs that cover her forehead. Lili is usually seen wearing a white Victorian-style dress, white boots, and a red-and-black Gingham patterned ascot tie. This outfit is described as her primary outfit.

Lili was introduced as a new character and was given two default outfits, just like every other character.

Player 1 Outfit
Her Player one outfit consists of a grey corset with white feather adornments and matching grey pants with an embroidered "white rose" print. Additionally, she wears a pair of white laced sneakers, black leather hand-wraps, and a black armlet on her left shoulder.

Player 2 Outfit
Her Player two outfit consists of a white "Victorian-style" dress with lace trimmings on the skirt and the cuffs. Finally, she wears a pair of matching red-and-white gloves and boots, along with a red checkered ascot tie.

Her Player Two outfit is her primary costume. 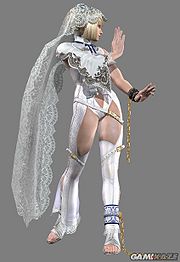 Lili returned with the same outfits she had during the previous game and gains a new console-exclusive outfit designed by manga artist Ito "Oh! great" Ōgure.

Player 3 Outfit
Her Player 3 outfit is an Avant-Garde Bride outfit which consists of a white leather abdominal corset connected to white skin-tight chaps, a white chest piece that covers the upper half of her bosom, and a white embroidered lace attached to her neck that covers her right arm. Finally, she wears a pair of white open-toed boots that are attached to her chaps, a white flowing lace veil, and golden chains and shackles.

Her 2P costume from the previous game is kept and when two players choose her default costume, her dress is recolored in black and blue. 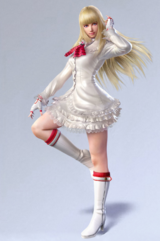 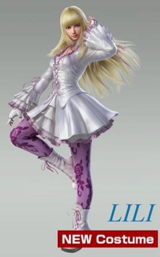 For the early stages of the game, her original Player 2 Costume was retained from the last game.

For Tekken 7: Fated Retribution, her outfit receives its first notable update since her debut: her dress is open chested and is decorated with multiple new pink silhouettes and ribbons, her gloves are retained and outlined with pink and finally, she has a new pair of fashion boots and she wears pink stockings underneath her dress.

Retrieved from "http://eng.tekkenpedia.com/index.php?title=Emilie_De_Rochefort/Outfits&oldid=83733"
Category:
Login to remove all ads