Since the creation of Jin Kazama in Tekken 3, gauntlets have been a standard part of all his outfits except one. The gauntlets themselves have changed from game to game. They appear to be a set of standard protection issued to people training in the arts of Mishima Style Fighting Karate, though this remains to be confirmed. 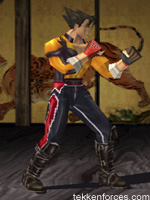 In Tekken 3, Jin wore two kinds of hand-protection; full length gauntlets which covered part of his forearm (player one costume), and what seemed to be only padded gloves with no added protection to the forearm (player two and extra costume).

With the exception of the added forearm protection on the gauntlets, the gauntlets and the padded gloves shared the same basic design and color-scheme. The padded side was red, while the fabric of the actual gloves themselves are black. There are also ten metallic 'rivets' on the padded side of both the gloves and the gauntlets shaped in a triangular design, similar to the gloves of his father, Kazuya Mishima. In 'real life', these would most likely be used to inflict damage to the opponent's hands or feet when blocking a punch or kick, however, the games have no such damage calculation.

Jin retained all his old outfits from Tekken 3 with no changes to design nor color-scheme. However, with the addition of a fourth costume based entirely on his player one costume, only with different colors, Jin gained a pair of full length gauntlets which were a dark, metallic blue instead of red. The design remained the same, as did the presence and placement of the rivets. 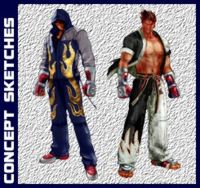 With the coming of Tekken 4, Jin had unlearned Mishima Style Fighting Karate in favor of traditional karate, due to his hatred of the Mishima family he was part of. This saw a change in his clothes, including his gauntlets, as well.

The changes consisted of the pads changing from red to a light shade of grey, the glove fabric remained the same color, but an extra piece of thin, red leather was placed between the glove fabric and the pads, covering part of the upper hand and forearm (best visible in the below Tekken 5 image).

The metallic pattern of his pads also changed from the reversed triangle pattern made from rivets to a slight spiral pattern made from three flat pieces of polished metal. It should be taken into account that Jun Kazama had this symbol on her third player outfit in Tekken Tag Tournament and that it may be the Kazama family crest. Jin likely chose this symbol to represent his respect for his mother. 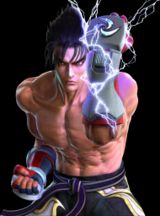 Gauntlets for Jin's player one outfit.

Tekken 5 brought the option of changing the colors of the pads on Jin's gauntlets, and when doing so, the red leather between the pads and the black glove fabric are removed. The default settings however keeps the gauntlets exactly as the were in Tekken 4.

Tekken 5 also brought the return of Jin's red, padded gloves and the triangular pattern made from rivets, however, only when using his extra costume. A variation of his old gauntlet also made its return, but as part of Devil Jin's costume, though, Jin did wear it in the Devil Within minigame. For more information on this particular gauntlet, see this article. 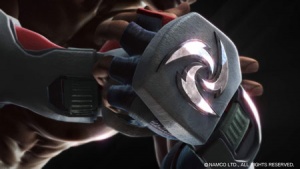 Jin's Gauntlets in the Trailer.

Jin gained an updated version of his original Tekken 3 player outfits. His gauntlets have been heavily updated, now consisting of a two-piece variation of his old padded gloves with added protection of the proximal phalanx of his thumb, and an optional armguard that can be taken on and off as he pleases.

The armguards also seem to be far bulkier and with added red 'spikes' or 'horns' portruding around the area of his elbow, when compared to his old gauntlets. It also seems to consist of three or four independent pieces of armor, that have been set together, as opposed to his old pads which were crafted from a single piece of material.

Tekken 6 was also the first installation where Jin is seen fighting with no gauntlets or gloves at all, i.e. barehanded.