In all her outfits so far, Zafina has black hair either appearing in a bun on the left side, having a shorter look, or hanging down past her chest. Her outfits are usually Arabian or Middle Eastern themed. 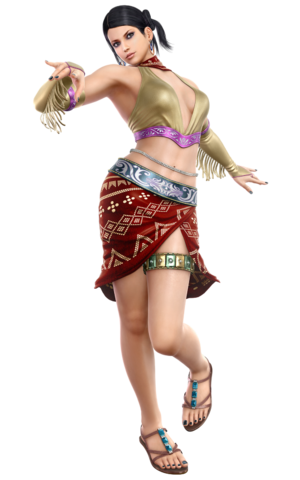 Her first outfit consists of a beige sleeveless shirt, a lavender folding on the bottom with silver designs, and a red scarf with yellow patterns covering her neck. Her gloves are fingerless and beige with brown strings hanging down and a lavender outlining the parts reaching her middle fingers. A chain with jewels surrounds her stomach above a turquoise belt around her torso with large silver designs and a small yellow outline around it. She wears a red skirt under with several yellow patterns and a metal bracelet on her right thigh. She also has blue and orange earrings and brown sandals with blue gems going vertically down most of her foot. She has blue finger and toenails.

Zafina vs Christie Monteiro in her Player 2 outfit

Her second outfit consists of a red sleeveless dress with a silver outlining in a V and a silver 'belt' outlining and a peach snake-like designs mostly on the back of the dress. A black dress is under that is seen through her neck. She has red gloves with light black gloves under them and silver bracelets over them. She also wears light black stockings with small light brown designs on them and dark gray heeled shoes with silver strips.

Zafina's customizations include puffy Arabian pants, a midriff that shows a lot of cleavage with a design similar to a bra, a miniskirt, and a strapless bra-like clothing item and a skirt-like clothing item combination. She also has options for her gloves and bracelets, including to remove them entirely. She also has an Arabian hairstyle, very similar to that of Disney's Princess Jasmine, earrings, and many sunglasses, including black sunglasses, exotic sunglasses, normal glasses, and yellow stars sunglasses. 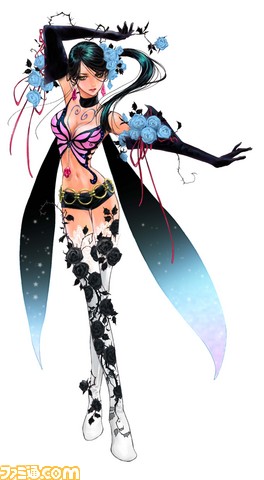 So far, the only new outfit Zafina has in Bloodline Rebellion is a butterfly themed outfit. The outfit consists of a pink butterfly halter top/bra, dark shorts, and a belt with golden hoops. She also has some dark butterfly wings blending into sky blue and lavender in the tips. Some black gloves with dark thorns, red ribbons, and several blue roses filling in and hanging out of the gloves. She wears white boots, and has a black rose design covering most of her leggings and boots. Her ponytail hangs out for the first time.

The costume design is from Mutsumi Inomata, who has made several of these exclusive outfits for other Tekken characters (namely Jin Kazama and Lars Alexandersson whose extra costumes, like Zafina's, are designed in a style reminiscent of CLAMP manga).

Player 1 Outfit: Following the concept of her Player 1 Outfit from Tekken 6, Her outfit now has a pair of white capri's underneath her her skirt (possibly due to censorship), with a black added design on her wrist bands and two gold bracelets on both of her wrists, her top is altered too and her sandals are changed to shoes with spider shaped designs on them.

Player 2 Outfit: Her top/skirt changes to light purple and her capri's change to black.