In her first appearance in Tekken 5, Asuka had two default outfits and two unlockable outfits.

Player 1 Outfit: Her 1P outfit is an Aikido uniform. It consists of a white short-sleeved aikidōgi (uniform) with a "flower" print on the left shoulder and a black hakama (wide trousers). Also, she wears a pair of foot guards, black and red gloves, and a white headband which is tied on her head.

Player 3 Outfit: Her Player 3 outfit is a school uniform for a parochial school in Osaka (notice the badge). It consists of a white short-sleeved blouse with a yellow knitted sweater vest over it, and blue checkered mini skirt. Finally, she wears a pair of black shoes with blue knee-high socks, blue gloves and blue panties underneath.

Player 4 Outfit: Her Player 4 outfit is a modified geisha dress. It consists of a black kimono with a "white web" motif. She only wears the left sleeve, leaving the right sleeve down and her right arm uncovered. The kimono is held together by a long red Obi (sash) and a blue Obi-Jime (braided cord) around her hip. Finally, she wears a pair of red heeled sandals and panties underneath.

This outfit is loosely-tied, thus revealing Asuka's left leg with a tatoo of the word 通天閣 (Tsuutenkaku) written on her inner thigh, and her breasts that are covered by Sarashi (cloth strip)

In this outfit, her hair is tied up in a loose bun with some pink flowers.

It was designed by Ito Ogure, a Japanese manga artist, known for creating the manga series Air Gear and Tenjou Tenge. 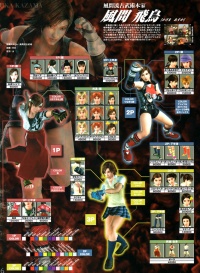 In Tekken 5: Dark Resurrection, As all the other characters from Tekken 5, Asuka returns with the same outfits she had, but with a palette-swap.

In her 1P outfit, her hakama changes to red and her gloves change to lime green

In her 2P outfit, her jumpsuit changes to black and her sports bra and kickpads change to red.

In the console edition of the game, Asuka has a extra outfit designed by manga artist Mamoru Nagano.

Her new extra outfit is a trendy outfit that consists of a short yellow V-neck dress with orange stripe prints, a red checkered mini skirt, orange leggings, and a pair of black pointy-toed boots. An orange poofy scarf is wrapped around her neck, and a pink lacy under shirt is seen between the neckline of her dress.

Asuka's original render for the game. 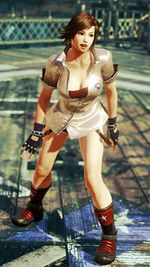