Since Lei Wulong is a Kung-Fu master and an international cop, his outfits have remained similar and with more detail and or designs added. After the game he first debuted, Tekken 2, he also gained his trademark ponytail.

Lei Wulong's Player 1 outfit consists of a purple Kung-Fu jacket, black Kung-Fu pants, and black martial arts shoes with white socks. When he fights with his purple jacket, he has his sleeves folded to reveal a white inside. He also wears a black belt around his jacket in the stomach area.

His Player 2 outfit consists of a white shirt with black straps, beige-colored pants, and black shoes. Lei also has his sleeves rolled up, but this time it's up to his elbows.

Lei's Player 1 outfit remains similar to his Player 1 in Tekken 2, but with a few color changes. His outfit changes his Kung-Fu jacket from purple to green and his Kung-Fu pants from black to red (though purple in his cg art and ending). He still has his black shoes and white socks showing along with his black belt around his stomach.

Lei's Player 2 outfit is similar as his Player 2 from the previous game. The only differences are that his shoes now are brown, his pants are dark brown and more detailed, he gains a small black police belt and he wears black and blue fingerless gloves.

His Player 2 outfit in the game opening

In Tekken Tag, Lei's Player 1 outfit stays the same from Tekken 3 except his green Kung-Fu jacket is now longer and it goes down to his knees. The details on his pants are more visible as well.

His Player 3 outfit is a color change to his Player 1. His Kung-Fu jacket changes from green to purple and his pants are now green.

His Player 4 outfit is also a color change, but to his Player 2 outfit. His shirt is dark blue, his pants and belt are red-violet, his straps on his shirt are gray, and his shoes are black. 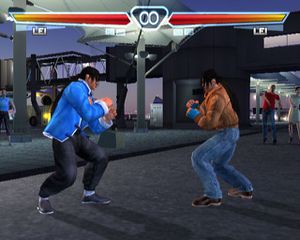 Lei's Player 1 outfit takes back its Tekken 2 look with a few changes. His jacket is now a lighter blue and it's now opened to reveal his chest. It also his a Chinese sign on the back and the jacket is outlined in white. His shoes are also more gray than black.

Lei's new Player 2 outfit consists of a brown leather jacket with some logos on it and a black shirt worn under, blue fingerless gloves, blue jeans and black shoes. This outfit is very diffrent from his past P2 outfit and it has yet to return in any future games. 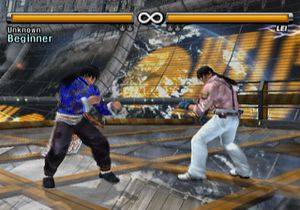 Lei's new Player 1 outfit takes back to it's Tekken 3 look. He wears a navy blue Kung-Fu jacket ,and more details such as the repetitive diamond designs on his Kung-Fu jacket and a dragon design on the back. His Kung-Fu jacket is now longer, like his TTT design, but it's down to his knees and only in the back. Lei also wears a dark brown Kung-Fu pants with details, red belt around his waist instead of a black belt and red strings around the bottom parts of his pants. 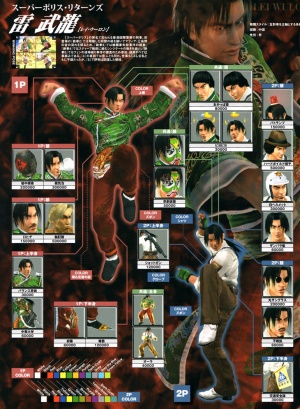 His Player 2 outfit is the same from his Tekken 3 Player 2 look except his shoes are white and his gloves are green in the front instead of blue. He also keeps his tie from Tekken 5. 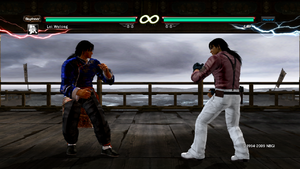