Hwoarang made is debut in Tekken 3 and had two selectable outfits, as with other characters in the game.

In Tekken Tag Tournament, Hwoarang's outfits remained unchanged from Tekken 3, however he also received two extra palette-swapped outfits based on his two outfits from Tekken 3.

Player 1 Outfit: His Uniform is Light Blue instead of white. His hair is also noticeably lighter.

Player 2 Outfit: His Tank top is white instead of Gray, and His chaps are blue instead of Dark Green. Like his Player 1 Outfit, his hair is lighter. 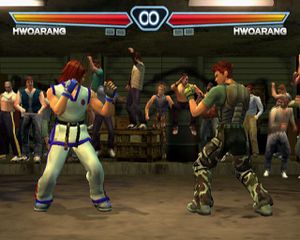 In Tekken 4, Hwoarang received two all new outfits, replacing the ones in the earlier games.

Player 1 outfit:Hwoarang's new player 1 outfit is still a white taekwondo dobok, but it now consists of a sleeveless shirt with blue outlines and a taegeuk on the left side of the chest, with a red eagle/flame design on the back referring to his Blood Talon nickname. His pants are the same design as his shirt and also feature a red design on his right leg. He has a black belt with his name printed on it and a taegeuk matching his shirt. He has blue fingerless gloves with a blue design and some writing on them, and wears black sneakers instead of blue footguards. His hair is unchanged from Tekken 3, however, he is no longer wearing the bandanna.

Player 2 outfit: Hwoarang's new player 2 outfit consists of the uniform he wore when he fled from the South Korean Army. Since being in the army, he also had to cut his hair and is seen with short spiked hair in place of his usual long hair. His army outfit consists of a green short-sleeved t-shirt, green (woodland) camouflage pants, green fingerless gloves, body armour, light green knee pads, and black footwear. 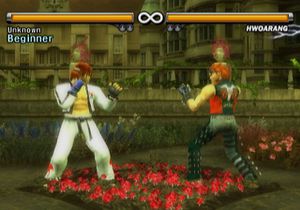 Tekken 5 saw Hwoarang's outfits returning to the style from Tekken 3 with minor changes. Note that starting with Tekken 5, players are now given the option to customize their character's appearance at the cost of prize money won from fighting. 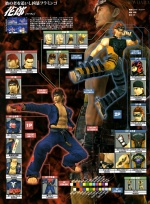 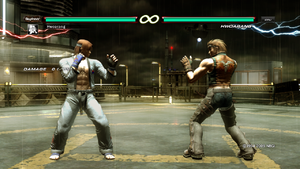 Hwoarang wears the original outfits he wore in Tekken 5 with updates. They remain unchanged from Tekken 6 in Bloodline Rebellion.

Player 2 Outfit: His Player 2 Outfit is reboot of the one he wore in Tekken 5: His vest is shorter and colored in light brown and green. He also gains a buckle at his collar, a necklace with a skull and star pendant. The lenses of motorcycle goggles have orange lenses, his gloves are changed to light brown to match his vest. Additionally, he wears a new pair of brown leather chaps with orange flame-like designs running along the sides and the instep of his boots are light brown.

(Note: His taekwondo dobok can be unlocked in the customization menu from winning gold panels in ghost battles)

He retains the same 2P costume from the previous game, and when two players choose him in his default costume, his costume will be colored in black and red.

Retrieved from "http://eng.tekkenpedia.com/index.php?title=Hwoarang/Outfits&oldid=83722"
Category:
Login to remove all ads