Julia Chang is the adopted daughter of Michelle Chang and has similar fighting moves as well as similar outfit concepts. Julia's Player 1 is almost always Native American-themed while her Player 2 varies.

Julia Chang's Player 1 outfit consists of a brown three-quarter length bra with a green shirt under, a denim mini skirt, and brown cowboy boots with white, knee-high socks underneath. Along with the clothing, she also wears a small Native American head dress with feathers, a beaded necklace, and a bracelet on her upper right arm with her hair in two short ponytails.

Her Player 2 outfit consists of a red, sleeveless top with a black see through shirt underneath, red sneakers with white laces, and blue jeans. She also wears a different white and brown headband that has the same design as her elbow pads, fingerless brown gloves, and her hair being in one ponytail instead of two.

This and her Player 4 outfit are color edits of her Players 1 and 2. It consists of her brown top changing to off-white, a now sandy denim mini skirt, and some blue cowboy boots with white socks underneath.

Her Player 4 consists of her red sleeveless top now being black with her black see through top still under, her jeans being orange, and her shoes are dark gray/black. Her headband is now a sky blue color and she appears to be wearing more elbow guards which are black. 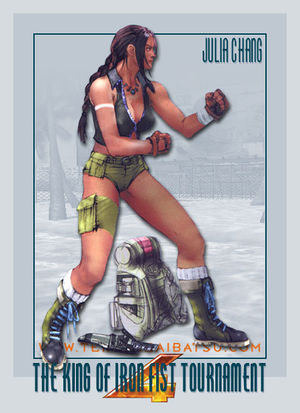 Julia Chang's Player 1 and 2 outfits change from the previous games. Most notably her hair which is now longer and in two pigtails from this game on. Her Player 2 outfit consists of green mini shorts, a darker green, three-quarter length denim shirt with purple outlining, white knee socks, and green hiking boots with sky blue laces. She also wears a necklace that's different from her Tekken 3 Player 1, a small green pocket belt around her thighs, and brown fingerless gloves. Her butt jiggles in this outfit.

Her Player 1 outfit consists of a half buttoned blue jean jacket, a white shirt with a blue V outline, blue jeans, and white sneakers with brown soles. She also wears a brown belt with feathers, white fingerless gloves with blue bracelets on her left wrist, and red oval glasses. Her butt also jiggles in this outfit. 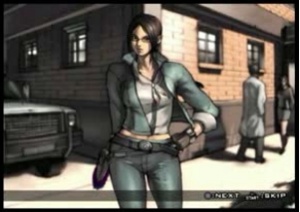 Julia's Player 1 Outfit is similar to her Tekken 3 Player 1 Outfit, except that her boots are different and she has an added symbol to the back of her top.

The same as her Player 1 Outfit from Tekken 4 but, she wears white boots instead of white sneakers 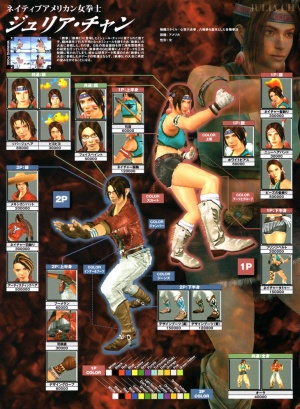 Tekken 5: DR
Both her outfits with customizations.

Julia's outfits remain the same from Tekken 5, with a few color changes. From her Player 1 outfit, her brown top is changed from brown to sky blue, her skirt being a little darker blue, and her cowboy boots changing from brown to white.

Her Player 2 changes her jacket from blue to light red/pink, her jeans and gloves being white, and her boots now being brown instead of white. 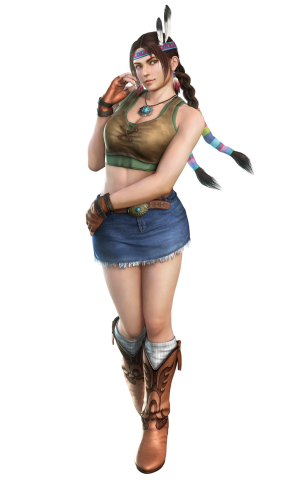 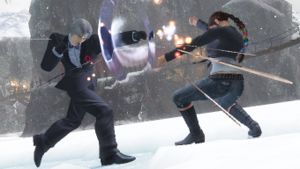 Her Player 2 outfits consists of a dark blue cropped wrap top with a white shirt under, her jeans now being three-quarter length, and black knee high boots. She also wears brown fingerless gloves, her Tekken 5 Player 2 necklace, light pink oval glasses, and her hair is in rainbow pigtail plates.

Julia's new outfit is her "Jaycee" outfit. This outfit consists of a pink and white wrestling outfit with white thigh-high boots, and matching white elbow length fingerless gloves with what appears to be pink elbow guards. She wears a matching pink and white mask with an opening on the lower half and over her eyes and on the back of her on the bottom so her hair can flow out. Her mask also has white feathers with black tips. It is stated that she can be customized to appear in her traditional Native American outfit from previous games.

Her Outfit is recolored in Black and Sea Green. 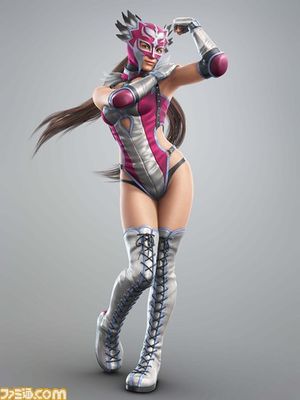