Nina Williams is notable for her blonde hair, being tied into a ponytail or a braid, and crystal-blue eyes. Nina usually wears lipstick, from violet, to red, to bronze, and even peach. Her signature color is purple, as she has at least one purple outfit per game.

Nina’s Player 1 outfit consists of a skin tight purple and black outfit with a yellow sash around her waist. The outfit is sleeveless and the bottoms are three quarter length. There's a black cuff around her ankle, and black armbands around her wrists. She has a red hairband on, and her nails and lipstick are also red. She is barefoot.

Nina’s Player 2 outfit is a black crop top with black sleeves that have yellow patterns on them. She wears black three quarter length trousers with vertical yellow ovals down the outside of her legs. On her feet are flat black and white shoes. She has blue earrings on, with a blue hairband. Her nails and lipstick are red here too.

Nina's Player 1 outfit is a skintight purple outfit with very short bottoms. She has high purple stockings with purple high heels. On her forearms Nina has purple sleeves. She has big purple earrings on, and her hairband and lipstick are red. There also seems to be a yellow ribbon dangling on the back of her dress. This outfit including the character model was also an unlockable outfit in Nina's solo game Death By Degrees after finishing the game two times.

Nina's Player 2 outfit is a green camouflage skintight suit. On her hands she has on black leather gloves and black leather boots that end just below her knees. She has a black hairband on, and her lipstick is red.

Nina's Player 1 outfit is a purple stealth suit. It's very similar in appearance with her first outfit of Tekken 2. She has a knife holster on her right thigh and her purple high-heeled boots go up to above her knee. Her forearms have purple sleeves and she has a purple cuff around her upper arms.

Nina's Player 2 outfit consists of a short, sleeveless, maroon leopard print crop top, along with some tight, black, leather pants. She has black stilleto heels on, and her black bra is visible. Her lipstick is dark red to match with her top. 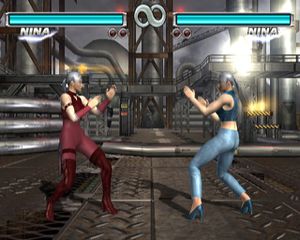 Player 1 Outfit: Her jumpsuit is red instead of purple and her hair is silver instead of Blonde.

Player 2 Outfit: Her outfit is light blue instead of brown and black and like her Player 1 Outfit, her hair is silver. 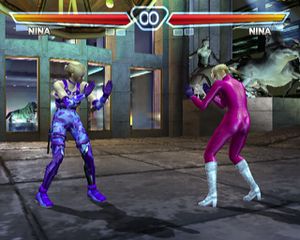 Her new Player 1 outfit is a camouflage purple and blue sleeveless catsuit. She has purple and blue long gloves that reaches to her elbows and purple and silver high boots. She has holster on her right leg and there's a choker on her neck.

Her new Player 2 outfit is a hot pink body suit. She has a silver necklace on and pink sunglasses. The outfit is finished off with purple leather gloves and white boots that go up to her knees. This outfit is similar to her Player 2 Outfit from Tekken 2. But in her,Steve and Lei's endings, the outfit is changed to black (except the boots) and doesn't wear sunglasses.

Though Nina has many outfits in this game, the pictures below are the ones that aren't featured in the Tekken series prior to Death By Degrees.

A white bikini. This outfit is first seen at the beginning of the game. Nina wears this outfit during the "Tutorial" part of the game.

A purple jumpsuit that resembles various outfits worn by Nina in the Tekken games. This outfit is obtained when Nina finds it in Lana Lei's closet on the Amphitrite.

A black, silver, and blue outfit. This outfit is first obtained when Nina and Alan leave the Solitaria Penitentiary by helicopter and head back to the Amphitrite. Alan gives Nina this outfit.

The pink and silver outfit that Nina first wears in the fighting tournament at the beginning of the game. It is an unlockable outfit. The player must play through Death By Degrees two times to unlock it. The suit is also a customizable item for Nina in both Tekken 6 and Tekken Tag Tournament 2.

An unlockable outfit. It is Nina's Tekken 2 character model. 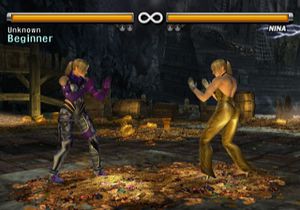 Her Player 1 outfit is similar to the Player 1 outfit she wore in Tekken 4. It is a purple camouflage army suit with splotchy designs around her body. Her torso area is separate from her top to show off skin. Six wires supports the clothing on her crotch. She wears long purple gloves that has two buckles on each and covers most of her arms and black leather gloves. Her purple and silver high boots look similar to the design of her gloves. She retains her knife hostler from Tekken 3.

Her Player 2 outfit is a gold sleeveless latex body suit. Her chest area is revealed but a leopard design surrounds it. She also wears some white gloves and white opentoe shoes with heels. 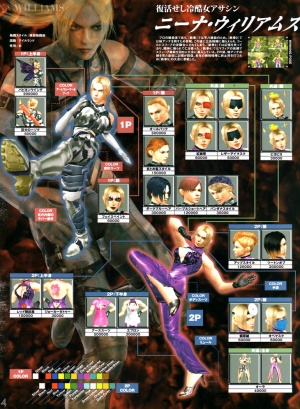 Both outfits with customization

Nina's outfits remain the same from Tekken 5, with a few color changes. In her Player 1 outfit, the army suit changes from purple to white.

Her Player 2 outfit changes her latex suit from gold to purple including the leopard area. Her gloves and shoes also changes, but from white to black. 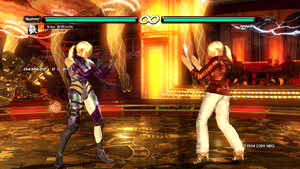 Her new Player 2 outfit consists of a red-velvet leather jacket with a white shirt and some white trousers. She wears the white opentoe shoes similar to her Tekken 5 Player 2, except they have straps. A belt also surrounds her jacket and is the same color.

Nina's new revamped default costume has her in a strapless white wedding dress but with the bottom half of the dress looking torn down, dirty and a bit bloody. For her accessories, she has a white veil with tan flowers as she wears her hair to the right side of her face. She also has drop, elegant earrings, white long gloves and what appears to be ankle strap platform shoes. Completing her outfit are her weapons on her upper left leg which can be seen because her wedding dress appears to be ripped on that part. She has a gun, a gun holster, a flash hand grenade and a couple of extra magazines. Her knife has moved from her upper right thigh to her lower right leg and is hidden partly by the wedding dress.