Before becoming a cyberborg, Bryan was a cop, so he has numerous outfits with police motifs. He also has a tribal tattoo on his neck, a scar on his face and a big cross shaped scar on his back.

In Tekken 3, Bryan Fury made his first appearance as an unlockable character and the replacement for the previous kickboxer, Bruce Irvin.

In his Player 1 outfit, Bryan wears cop clothing. He wears a vest (possibly bulletproof) with "SWAT" written on the back, city (a.k.a.urban) camouflage trousers, and a pair of black boots. Additionally, he wears black gloves, black knee guards, and a red band is tied around his left arm.

In his Player 2 outfit, Bryan wears a reptile leather trousers and brown shoes. Additionally, he wears black gloves and has no shirt on.

This is a new outfit for him: It consists of a green, unbuttoned military-style jacket, blue trousers and black boots. He also wears black gloves, a snake band full of bullets on his right leg, a small pocket knife beneath, and a red snake band around his left leg.

His Player 2 outfit was updated and modified. Some differences are the metal snake band attached on his trousers, The modified pattern on his pants. Finally, he wears black metal gauntlets, metal skull armlets, and he carries a small pocket knife. 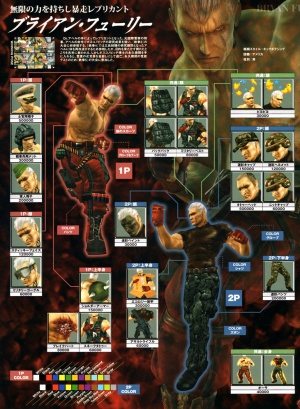