Player 1 Outfit: His Player 1 outfit Consists of a long sleeved black karate robe with a black belt with yellow stripes. There is a picture of tiger's face on the back. Heihachi's hands and feet are wrapped in a grayish cloth.

Player 2 Outfit: Mostly a blue pallete swap of his Player 1 outfit, with the exception of the partly ripped sleeves.

Player 1 Outfit: Following his first player outfit from the previous game, Heihachi wears his karate gi once again. However, the pants has been redesigned, the belt is now red instead of black and yellow, and the sleeves are ripped off. It is most likely the sleeves were ripped off when he was thrown off the cliff.

Player 2 Outfit: His new Player 2 outfit is a burgundy colored hakama with white clothing surrounding it (Most likely a kimono top.). He also wears hand wraps and geta sandals.

Player 1 Outfit: Heihachi's Player 1 outfit marks the return of his hakama pants from Tekken 2, the pants' colors have changed to blue with gold symbols and he no longer wears hand wraps, now he uses samurai arm guards instead. 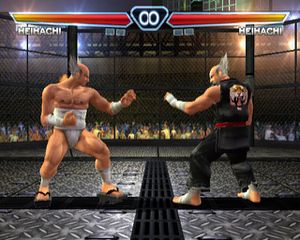 Player 1 Outfit: His new Player 1 outfit now consists of a white japanese fundoshi with white bands around his wrists and ankles he also wears his geta sandals in this outfit.

Player 2 Outfit: His Player 2 outfit marks the return of his black tiger gi from Tekken 2, the only difference being that now his wrist tape is longer. 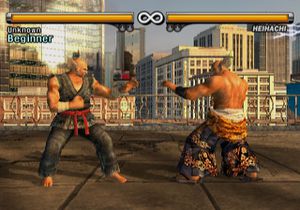 Player 1 Outfit: His Player 1 outfit marks the return of his tiger gi from Tekkens 2 & 4. However, there are a few changes: the tape that was wrapped around his hands and feet is only wrapped around his wrists and ankles, and his gi top and pants are now heavily tattered and torn, also taking on a dark grey color. 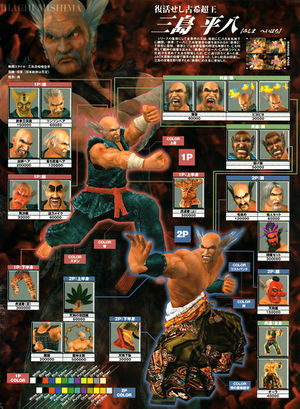 Both outfits with customizations 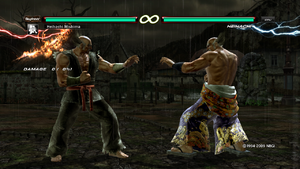