Player 2 outfit: Considered to be His "casual" clothes, he wears a white tank top, ripped blue jeans, red converse sneakers and his red gloves from the aforementioned Player 1 Outfit.

His player 2 costume for this game remains one of his most unusual yet. He wears a white, unbuttoned dress shirt, with a see-through version of his original tank top from Tekken 1 underneath. Notably, there is a large image of a demon on the back of his white shirt, possibly representing his other self, Devil. He also wears a dark blue jeans,black belt and black boots with metal protectors.

This outfit consists of purple tuxedo jacket, purple pants, black dress shoes, and black sash around his waist as a belt. Underneath the purple jacket, his white V shaped vest that is connected to his white collar in his both hands is shown. He also wears a orange-yellow scarf underneath his vest. This rare outfit represents that Kazuya is the head of Mishima Zaibatsu and his player 1 and player 2 outfit would be inappropriate for him as long as he is seated on the top level throne. He's not most likely appear in this costume when he goes to fight in the tournament, but he does every time you fight him in the story mode because you are invading his Mishima Zaibatsu's throne room. 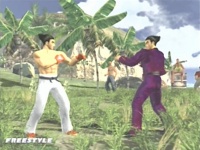 Kazuya in 1P and 2P costumes.

Player 2 Outfit: For his Player 2 Outfit, his tuxedo has changed in several notable ways. The black sash is gone, and the jacket now only hangs to the waist, instead of being tied into his pants. The suit also has a strange, metallic glow. 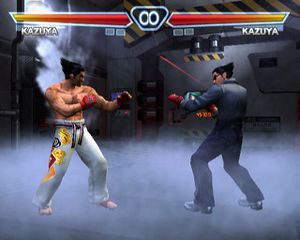 For his triumphant return to The King of Iron Fist Tournament after 20 years of absence, Kazuya's player one costume gains it's first notable change and got a new player two costume.

His white gi pants are no longer tattered and torn and now have a yellow cloud and lighting-like design on the left leg. His belt changes from black to purple with the yellow outlines from Tekken. His gloves have also been updated, gaining black leather wrist straps and they are fingerless.

His new Player 2 outfit consists of a dress shirt, black corduroy pants, black dress shoes, black sunglasses and his trademark red gloves. The color of his shirt is hard to tell because it looks slightly different depends on in what stage you fight him. It's most likely black although it's mixture of black and blue because its color is very dark.

For this game, the yellow cloud and lighting logo on his pants is replaced with gold flame designs on the individual right and lower left sides of his pants with respective purple and red colors on the insides of the flames.

His Player 2 Outfit marks the return of his trademark purple tuxedo. However, it has a modified design: It now has a long back-tail and he wears a red formal vest and tie underneath. Additionally, he wears his trademark red gloves in this Outfit. 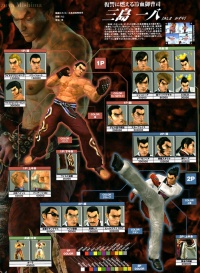 Kazuya in 1P and 2P costumes.

Player 1 Outfit: His gloves, foot guards and pants become burgundy instead of their usual white and red Colors.

Player 2 Outfit: His tuxedo changes To white instead of its usual purple color. His gloves however, remain red. 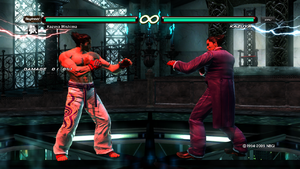 DLC Costume 1: Tuxedo from Tekken 5 (with alternate colors in white and black.)

His new attire is based on what he wore during the intro of Tekken Tag Tournament. He wears a charcoal grey suit with a matching dress shirt and red tie underneath a black leather trench coat.