Paul's outfit's pretty much remains the same in all the Tekken games (except Tekken 4) but with minor modifications.

Paul Phoenix's Player 1 outfit consists of a red judo uniform with the sleeves ripped off and a yellow judo sign, black belt and black hand and foot guards.

Paul Phoenix's Player 2 outfit consists of a black leather jumpsuit with a flaming skull design on the back, black fingerless gloves and boots with a flame designs on both sides of his pants.

The same as his Player 1 outfit from the first two games, but it is slightly tattered and torn also, the yellow judo sign is on the left side of his jacket.

The same as his Player 2 outfit from the first two games, but it is now short sleeved with shoulder pads, knee pads and a white t-shirt underneath. 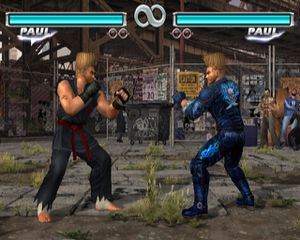 Paul's Player 2 Outfit is long sleeved again. However, his tracksuit went from black to blue, and is long sleeved without a white t-shirt underneath, like in Tekkens 1 & 2. 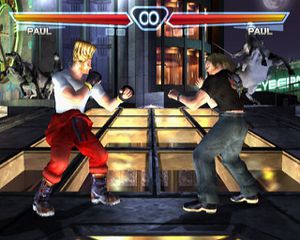 Paul in his ending.

His new P1 outfit consists of a white T-shirt with a long sleeved red gi uniform jacket thrown off and tied around his waist, red gi uniform pants with logos on them and navy blue boots with orange flame designs on them. Paul's clasic red judo uniform is removed, but he kept his black handguards and the black belt.

His new P2 outfit consists of a black T-shirt with a flaming skull design on the back,similar to his past P2 outfit, handwatch on his left hand, gray jeans, black shoes and his hair is down instead of the flat top style. This is the first and the only outfit that Paul has jeans, t-shirt, and doesn't have his trademark hairstyle and his gloves. 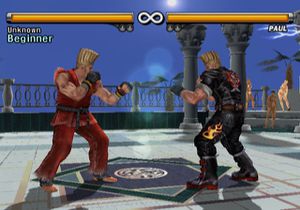 Same as his Player 1 outfit from the earlier games (except for Tekken 4.), but there are now white wraps around of his wrists and his red gi is even more tattered and torn than it was before.

His Player 2 Outfit Goes Back to the way it was in Tekken 3. However, his boots are now grey and red and his shoulder pads are much larger.

Both his outfits with customizations.

His Player 1 Outfit shows red his judo uniform is changing to white and his Black hand guards are changing to light blue.

His Player 2 outfit shows his Black Biker suit and leather boots changing to Blue. This color scheme is similar to the one from Tekken Tag Tournament. 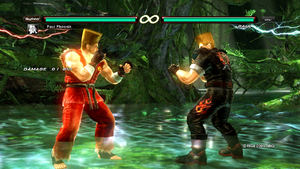 Retrieved from "http://eng.tekkenpedia.com/index.php?title=Paul_Phoenix/Outfits&oldid=83535"
Category:
Login to remove all ads