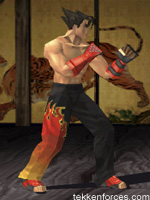 Player 2: His new 2P outfit is a white/navy blue nylon hooded jacket and blue pants with gold flame designs. The pants has a pocket lines on both sides,he also wears gray undeshirt and red sneakers with white soles and his gauntlets remain the same as his P1 outfit. It is one of his iconic outfits. When on the ground for a long time, Jin's hood will fall off. 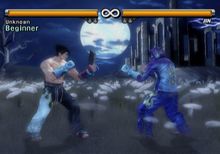 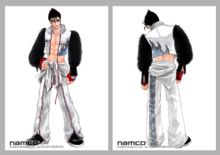 Player 1 Outfit: Identical from his old Tekken 3 P1 outfit, but his gauntlets are heavily updated, giving them spiked armguards and protection of his proximal phalanx of his thumb. The flames are covering up to his mid-thigh section, similar like Devil Jin, and he wears a belt with yellow outlines like Tekken 4 and 5, but it is black instead of purple. It is also one of his iconic outfits, like his Tekken 4 P2 outfit.

Player 2 Outfit: His new P2 outfit is a black trench coat with long back-tails and Devil Gene mark on the left side of the coat, white dress shirt with black stripes all over the shirt, dark grey striped dress pants and black dress shoes. This is the first and the only outfit that he does not wear his gauntlets/gloves.. It shows that Jin is the new head of Mishima Zaibatsu.

Jin's new outfit appears to be a combination between his hoodie from Tekken 4 and Tekken 5 and his black biker outfit from the arcade opening of Tekken 6: Bloodline Rebellion.

He wears a black and gray leather hoodie jacket with gray, red and blue flame design at his hood and the lower part of his jacket, gray leather pants with a red belt to his waist and red metallic boots. He also wears a large red shoulder armor in each side of the jacket and an updated version of his trademark red and black gauntlets from Tekken 6.