The character King II was introduced in the game Tekken 3 and returned in every subsequent game after Tekken 3 and took King I's place. His teacher, Armor King which appeared in the first games of the series trained King before Tekken 3. King is mostly known to be an incognito wrestler wearing a jaguar mask just like his master and predecessor. 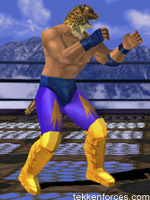 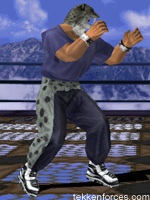 His Player 2 outfit consists of a dark blue T-shirt, with a red colored graphic on the back. He also wears blue-black sweat pants with a gray jaguar design on the area around his waist and the sides. He also wears some white-black sneakers, gray wristbands and a black jaguar mask (presumably Armor King's as it has the same blood red eye). The kanji on the back of King's shirt reads "Mishima Industries" (black characters) and "Evil" (red character). This is the first and the only outfit that his tail is not shown. 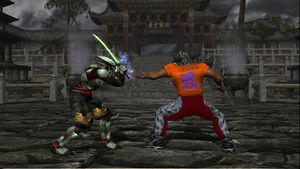 Fighting Yoshimitsu in his P2 outfit 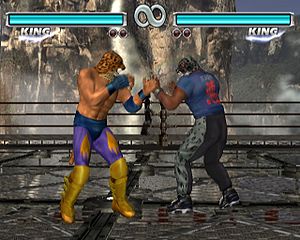 King retains the same costumes as Tekken 3 and Gains new palette swapped versions of them as well. However, they are now his Player 3 & 4 Costumes.

King's Player 2 outfit changes his shirt from light blue to orange with the same kanji on the back. His pants are also now red with the same Jaguar pattern as Tekken 3 and his shoes are gold. 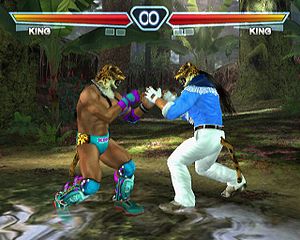 His Concept Art in an Alternative Outfit.

King's new Player 1 outfit in Tekken 4 is similar to the outfit from Tekken Tag Tournament but, he wears a matching turquoise blue trunks, knee pads and wrestling boots. KING - Anger of Beast is written across the front of his trunks. His trunks also have a leopard print design on the both sides and his boots have pink buckles and they expose his calves, he also wears purple and torqouise fingerless glove, turqouise elbow pad with purple outlines, turquoise armlet, black braclet and white hand wrap. Finally, he sports a brown long hair underneath the mask shown for the first time.

King's new Player 2 outfit in Tekken 4 is a blue cowboy jacket with white pants, fingerless gloves and shoes. King's hair also hangs under the mask in this outfit like his Player 1 outfit. 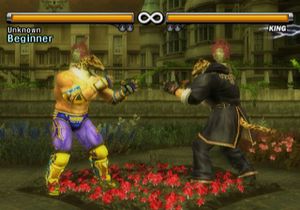 King's new Player 1 outfit for Tekken 5 is very similar to the one worn in Tekken 3, but with a gold outline around the waist, new emblems on the trunks and both sides of his tights, he also has a yellow band/pad on his left forearm only, as well as matching yellow fingerless gloves and elbow pads on both arms (Instead of just one), and a blue and purple band with a yellow pad on it wrapped around his right biceps only. He also has kneepads and wrestling boots similar to the ones in Tekken 4, but yellow like in Tekken 3. His trunks also say KING ANGER OF BEAST on the front of them, like in Tekken 4.

King's new Player 2 in Tekken 5 outfit is changed from his usual look. He wears a black long hooded priest leather coat; part of it being white with a golden outlining. He also wears black trousers with some golden outlining, some black leather shoes, and a pair of black fingerless gloves. His 2nd outfit mostly resembles of Sherwani, an Indian outfit wore by Indian men. 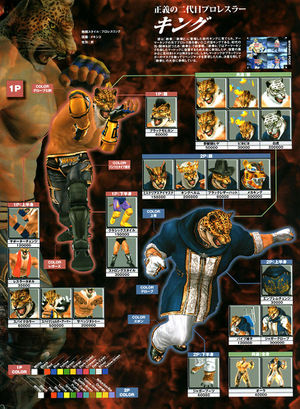 Both his outfits with customizations.

King's outfit remains the same from Tekken 5 but with a few color changes. In his Player 1 outfit, his tights are changed from blue and purple to black and gray, his wrestling boots change from yellow to black as well. His Elbow Pads and Ggoves however, remain yellow.

His Player 2 his jacket changes from black to blue, his pants and gloves changing to white, and his shoes stay black. 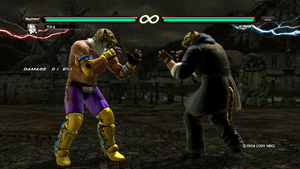 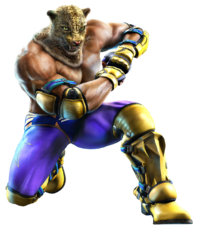 King retains the wrestling attire from the previous game. However, when two players choose his default costume at the same time, the other King's wrestling gear will change to black and grey like it was in Dark Resurrection. 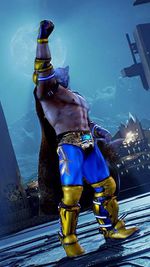 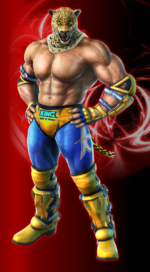 King's original render for Tekken 7 with the newly added colors to his wrestling gear.
Retrieved from "http://eng.tekkenpedia.com/index.php?title=King_II/Outfits&oldid=83881"
Category: