Ling Xiaoyu is Chinese teenager with dark brown eyes and black hair tied in two high pigtails. She is also a student at Mishima High School in Japan. As such, her outfits have a dominant chinese-oriental theme, and her Mishima High School uniform has been a staple outfit ever since her debut.

Ling Xiaoyu made her debut as one of the 6 characters to have three different outfits. Only Forest Law, Jin, Eddy, Gun Jack, Anna and Xiaoyu have a third outfit. This third outfit is unlocked by playing as Xiaoyu fifty times and then selecting her with either the "Start" button or the "Triangle" button.

Player One outfit
Xiaoyu's first outfit is traditional Chinese outfit, consisting of an orange sleeveless qípáo top and a lighter-toned inner shirt with puffy sleeves, tucked in a yellow Obi (sash) tied in a big ribbon at the back, orange Kung-Fu pants, dark Kung-Fu slippers and thick red bracelets.

Player Three outfit
Xiaoyu's third outfit, like Jin's, is her Mishima High School uniform. It consists of a white blouse attached with a sailor-style collar with one green stripe on each side, a black sleeveless vest, pleated blue-green checkered skirt, and brown loafer shoes with white loose socks. A ribbon is tied in the front and is attached to the collar. The "Sailor Outfit" [1] is a common style of uniform worn by female students in Japan.

She retained her all 3 outfits from Tekken 3. However, Xiaoyu gained recolored versions of her original 1P & 2P costumes. One of whom can only be selected by the pressing R1 on the random character question mark icon boxes.

Xiaoyu's Player 1 and 2 outfits in Tekken 4

Ling Xiaoyu gained two new primary outfits that are huge contrasts of her previous traditional ones from Tekken 3. Her friend, Miharu Hirano, becomes an alternate character swap when unlocked.

Player One Outfit
Xiaoyu's first outfit is a dainty pink sleeveless dress with yellow and white floral designs on one side, and matching pink hairbands and thick glowing bracelets with a yellow glow. She also wears pink shoes with black lining and glowing yellow stripes on the front and back. Underneath her dress is dark purple underwear.

Player Two outfit
Xiaoyu's second outfit is a modern sporty outfit consisting of a red cropped sports cardigan with a large white stripe design, outlined in black, on the sleeves and a black sports bra with white lining underneath. For her bottoms, she wears white track pants with black stripe designs going down the sides, and pink sneakers with black-and-red designs and white soles. She has matching pink hairbands and thick glowing bracelets, like in her Player One Outfit.

Xiaoyu's Player 1 and 2 outfits in Tekken 5

Ling Xiaoyu gained new primary outfits that slightly resemble her previous ones from Tekken 3 and Tekken 4, and three extra costumes that can be purchased, giving her a total of five outfits, making her the character with the most outfits in Tekken 5.

In Tekken 5: Dark Resurrection, the qípáo and bracelets were changed to orange.

Player 4 outfit
Xiaoyu's fourth new outfit is a trendy Panda themed outfit, consisting of a white corset with white fur on top and black furry round sleeves, a pink rose choker, a white miniskirt with white fur on the bottom and trendy belt straps, and black long gloves with fur matching her sleeves. She wears black knee-length socks, and trendy pink boots with various black-and-white designs, and black fur on top.

In her Player Two outfit
She wears a white denim jacket with a black collar stitched on, pink fingerless gloves, black sleeveless shirt worn under, a blue belt, black shorts and pink shoes with black lining similar to the ones she wore in Tekken 4.

Player Three outfit
Like Armor King II, Marduk and King II, She wears a TapouT shirt with a red checkered skirt white boots and her bangles from Tekken 5 return. 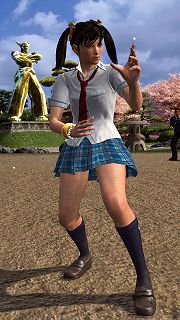 Her 1P outfit is retained from the last game, and when two people choose her default costume, her outfit will be recolored in pink like it was in Tekken 5.

In Tekken Tag Tournament 2 Prologue, she wears a white polo long sleeved polo shirt (though the sleeves are rolled up to her elbows) with a red tie, while retaining her hairpins. Her skirt is light blue and checkered while she also wears dark blue knee-high socks and brown leather shoes. It is her Tekken: Blood Vengeance attire.

Her costume was retained from the last game in the earlier stages of Tekken 7.

She gains a new costume which follows the style of her previous outfit. Xiaoyu once again wears her traditional qipao, but with a twist; her dress remains orange but is much longer and trimmed in gold and green, she wears black leggings, and instead of wearing bangles she wears bracelets and gloves thus, giving her a more mature look.

Retrieved from "http://eng.tekkenpedia.com/index.php?title=Ling_Xiaoyu/Outfits&oldid=83737"
Category:
Login to remove all ads