§Characters are in the middle[edit]

Antonio was a young normal boy.He was bad at sports. Someday a classmate annoyed him .He fight with him and Antonio wins. His classmates gave him the nickname FinNaL.

Two monhts later, a stranger with a black robe and a dragon mask entered in his classroom and gave him a envelope. It was an invitation to King Of Iron Fist Tournament 4.

Wondering if that stranger will be in tournament, FinNaL enters in the game

In his ending he is fighting with Heihachi in the Arena Stage.Heihachi tries to throw a punch ,but FinNaL defended.After that, FinNal Grabs his hand and throws him in the crowd. FinNal goes to Heihachi, but he dissapeared.In the place where must be Heihachi,was the stranger's Dragon Mask. FinNal grabs the mask, and say : "Heihachi,you were?"

After the King of Iron Fist tournament 4, FinNaL returns to his normal life.It is known that he defeated Steve Fox, and they became friends. After several months,Steve came in Romania and asked FinNaL if he heared about the death of Heihachi.Confused,he entered in the King of Iron Fist Tournament 5 to find more

FinNaL runs into Lee (while at the Final Frontier) and asked him who is him.Lee said he is the adopted son of Heihachi and FinNaL said "So you're a Mishima...that means you are my rival"

After FinNaL wins, he says "Sorry buddy, but I need to solve something"

FinNaL flirts with Asuka,but Asuka says she is not intestred. Then FinNaL say: "Don't worry sweetie, we will solve this"

If Asuka wins, she will say: "So you think you can be with me? NO WAY!"

If FinNaL wins,he will say: "Don't worry, my beautiful one. If i win, the prize is yours"

When FinNaL wins, Heihachi says: "I think you can know...I am the stranger. I followed you everywhere .I think you don't know, but you're special...I belive you can win this tournament." .Then FinNaL says "I've always known that you are good inside you"

FinNaL walks through Final Stage 2. Jinpachi (in human form) walks up behind him and says, "I'm impressed that you've made it this far. I am Jinpachi Mishima. My goal... My goal is to destroy all existence!" Shortly after Jinpachi starts to speak, FinNaL turns around and notices him. After he finishes speaking, Jinpachi transforms into his "Devil" form.

FinNaL Is Shown In the Mishima Zaibatsu Throne Room, holding Asuka's hand. She asks "What is this". FinNaL replies: "Remember that I said the prize is yours if I win?So, here it is". Asuka blushes and kiss FinNaL.First time, he was surprised, but he recovered.After 3 seconds, a scream destroyed the silence.FinNaL runs in the lobby and finds Lee rounded by the Tekken Force.FinNaL told: "Leave him alone".Lee raised from the floor and said "I heared you win against my father.I hate him too". FinNaL replies: Don't worry, I know he have a good side.And... I'm sorry I judged you".Lee gives a thumbs up.

FinNaL's storyline is unchanged between Tekken 5 and Tekken 5: Dark Resurrection.

After King of Iron Fist Tournament 5,FinNaL became friend with Lee Chaolan, boyfriend of Asuka Kazama (According to his epilogue) and find the mystery of the stranger who invited him in KOIFT4. Again,he returned in Romania at his friends and parents.

Arrived, he was greeted by his friends and his parents.They asked him about his new life.He was surprised when he saw Steve Fox,his old friend. He celebrate his 18 anniversary along with his old and new friends.

Months later,FinNaL was invited In the King of Iron Fist Tournament 6.He was happy because he will meet again his team.

FinNaL is shown talking with Lili. She flirts with him .Lili aproaches and tries to kiss FinNaL,but Asuka appeares and says "What are you doing".Lili replies "Look who is here" and immediately kiss FinNaL. Asuka remains shocked.After 3 seconds, she say "Who do you think you are to kiss my boyfriend?" ,and she attacks Lili. Lili remains unconscious, and Asuka aproaches to FinNaL and say "And what are you doing with she?". FinNaL says "Uhm, I..." but Asuka gives him a slap.

FinNaL's storyline is unchanged between Tekken 6 and Tekken 6: Bloodline Rebellion.

Although he never actually appeared in the movie, FinNaL s given a slight mention by Steve Fox

FinNaL is set to appear in Tekken Tag Tournament 2. FinNaL was announced as a playable character in the game by Harada

§Fight for your life[edit]

Some battles against my brother:

Probably her best pose ever! 5/5

This really suits a Taek Won Do practitioner. 5/5

He looks angry !I hope he will not throw me off of a cliff 3/5 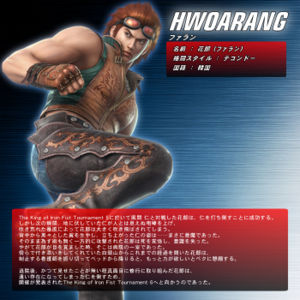 This really works,but not for Kuma 3/5

I can really change my mind about her. 5/5

This pose really suits him! 4/5 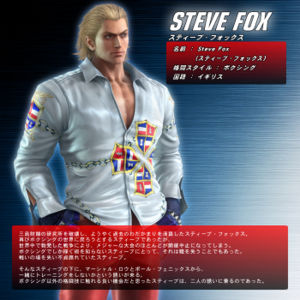