From Tekkenpedia
(Redirected from T2)
Jump to: navigation, search

Many battles were fought. But only one lone warrior emerged with the right to challenge Heihachi Mishima for the title of King of the Iron Fist.

This warrior was Kazuya Mishima, Heihachi's cold blooded son. Bearing the scar given to him by Heihachi, he enters into vicious combat with his father on the same field where Heihachi last struck down his own son and dropped him into a trench at age five.

Exactly two years after the first Tekken tournament, a message is relayed from the Mishima Zaibatsu fortress to news agencies all over the world announcing a second tournament with a prize a thousand times that of the first.

So the tournament begins... 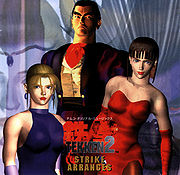