From Tekkenpedia
(Redirected from Kazume Mishima)
Jump to: navigation, search

Kazumi Mishima is the wife of Heihachi Mishima and mother of Kazuya Mishima. Prior to Tekken 7, she was not mentioned throughout the series except in Tekken 2's musical score, leading many fans to speculate what happened to her. Though she physically appeared in Tekken: The Motion Picture, she made her video game debut in Tekken 7.

Harada stated that Kazuya was not the first Mishima family member to make contact with Devil[2], and that Kazuya and Jin believe it started with Jinpachi[3] but only Heihachi really knows who it was[4]. Harada also pointed out that neither Jinpachi, Heihachi nor Lars possess the Devil-gene[5]. This may hint towards Kazumi being the first to have the Devil gene and would explain why Jinpachi, Heihachi and Lars do not posses it yet both Kazuya and Jin do. It is soon revealed in the trailer of Tekken 7 in the San Diego Comic Con of 2014 that she does indeed have the Devil Gene.

During a trailer for Tekken 7, Kazuya mentions that Heihachi was the one who killed Kazumi before the events of the first game. Later a full version was released during the San Diego Comic Con. The first shows a conversation between her and an unknown figure, several decades prior to the events of Tekken 7. Kazumi states that she must stop Heihachi, as he knows that Kazuya, though young, was born with her powers, and that there's no telling what Heihachi would to Kazuya and others. She then furthers this by stating that if she is killed in the process, Kazuya must perform the act himself. She then notes that she doesn't have complete control of her powers; Regardless, she will still push through with the effort, even if it kills her. Despite saying all of these, she remarks that she still loves Heihachi, and that he still loves her.

Her initial design was done by Mari Shimazaki.

* Her name in kanji appears on the floorboard of Tekken 2's Pagoda Temple stage. 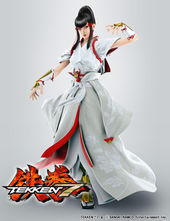 Kazumi's moveset, shows a unique fighting style, but still utilizes "Mishima" moves such as their "Demon Slayer." In her devil form, she can now hover back and forth in the stage in a quicker manner than Jinpachi's flight in Tekken Tag Tournament 2.

The wife of Heihachi Mishima and the mother of Kazuya Mishima. Not much is known about her. But from what is known she was a kind nurturer to Kazuya, as opposed to her husband Heihachi, who was cruel to him. Kazuya would inherit his mother's genes and grew up to be kind-hearted in his early years. But after Heihachi threw him off a cliff Kazuya sold his soul to the Devil, for his survival and revenge against his father, making him a shadow of his former self.

Kazumi Mishima appears in a picture in a locket, along with baby Kazuya.

Kazumi was most likely a nice and loving person. Her death is probably one of the main reasons why Heihachi threw Kazuya off a cliff.

Heihachi reveals to Kazuya that the caused behind his amnesia and him being sold to the Minister was all part of his plan to rid Kazuya of his mother's "soft heart and weakness".

Retrieved from "http://eng.tekkenpedia.com/index.php?title=Kazumi_Mishima&oldid=82466"
Categories:
Login to remove all ads