Gigas (ja. ギガース Gigāsu) is the fourth timed released and sixth new playable character in Tekken 7 announced during the Nico Nico Chokaigi stream by Tekken producer Katsuhiro Harada. Prior to his official release, his render was leaked alongside Josie's, Jin's and Devil Jin's.

Despite his appearance, Gigas may be human as a person's lips can be spotted right below the "eyes". 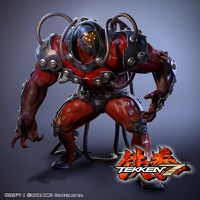 He has moves that bear similarities to Craig Marduk. Whether the two are related by story or not is unknown.