Katarina Alves (カタリーナ・アウヴェス Katarina Auvesu) first appears in Tekken 7. She was first announced with the reveal of her concept art by Harada for Tekken 7's Location Test in Japan, October 2014. She was designed to be a "beginner friendly". In terms of her character, she was stated to be "sassy mouthed and vocal"[2]. 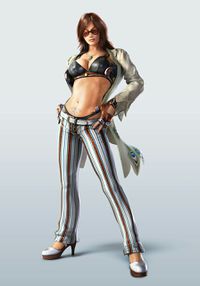 Retrieved from "http://eng.tekkenpedia.com/index.php?title=Katarina_Alves&oldid=82113"
Categories:
Login to remove all ads