Shaheen (シャヒーン Syahin) is the fourth new playable character in Tekken 7. His concept art was first shown during August 2014, in which Harada asked arab fans if the design was acceptable due to an accident regarding the Tekken Tag Tournament 2 stage, Modern Oasis. Shaheen received favorable reactions, and his inclusion was announced at Harada's twitter on January 1, 2015. 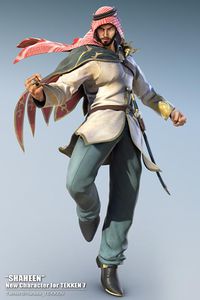 Shaheen has Lee Chaolan's "Gut Polisher", and a version of Lee and Law's slide. Whether the two are related in story or if this is just a coincidence is unknown.