Jack-5 first appeared in Tekken 5 and returned for Tekken 5: Dark Resurrection. Jack-5 was sent to the fifth tournament for field testing. He was replaced by Jack-6 in Tekken 6. 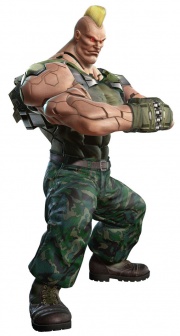 Jack-5, does not have the unique Ganryu moves that Gun Jack had.

Prologue (In-Game Text)
Beloved Jack-5... Two years ago, a physics scientist named Jane tried to sneak into Mishima Industries with Gun Jack. However, they were discovered by a Tekken Force patrol and were fired upon. Gun Jack placed himself in the line of fire to protect Jane. After the hail of bullets stopped, Gun Jack had ceased to move. The day after, Jane was found and rescued by a G Corporation freighter. Jane joined the robotics division of G Corporation and successfully created Jack-4. Jane used data collected from Jack-4 and began work on a newer model, Jack-5. She saw the upcoming King of Iron Fist Tournament as the perfect chance to test the latest model, equipped with state-of-the-art technology.

Interludes (Unofficial Synopsis)
Stage: Heihachi Mishima:Jack-5 encounters at the Final Frontier. As Heihachi is speaking, Jack-5 prepares its Data Analysis Program. After defeating Heihachi, Jack-5 headbutts him several time (like in Heihachi's interlude with Jack-5), and it finishes him with a charged uppercut, which sends Heihachi flying off of the platform. Finally, Jack-5 raises its arms and flies away.
Final Stage: Jinpachi Mishima: Jinpachi says "Die." Jack-5 has now found his primary target and is ready to fight. Upon victory, Jack-5 walks over to Jinpachi and begins jabbing his unconcious body several times. Jack-5's analysis has successfully been completed.

Ending (Unofficial Synopsis)
Jane is seen working on her laptop in front of a deactivated Jack-5. After a moment, Jack-5 becomes active; however, Jack-5 is going haywire, destroying everything in the room. Just when he is ready to destroy Jane, the newly uploaded memories kick-in and Jack-5 remembers who Jane is, stopping the madness. He picks up Jane and they go on happily ever after.