Zafina (ザフィーナ Zafīna) was introduced in Tekken 6, and has returned for all subsequent titles. She was first shown in the official trailer for Tekken 6, where she was shown fighting Asuka Kazama and Jack-6. She is the defender of a royal family grave that was attacked by a heavily armed group from another country. She dispelled the perpetrators single-handedly and in response, the family elder appoints her as the clan's sole assassin.

Zafina seems to have a cold personality. She also appears to be threatening her opponent at times, due to her pre-fight and post-fight quotes. Other than this, very little is known about her personality.

According to Zafina's EU bio[1], her nationality is Indian. However, the original Japanese bio[2] states it as being simply Unknown, as does her NA bio[3], having since been corrected. When fans brought Zafina's origins into question once again, Harada's response was "Probably Egypt". However, some of her customization items suggest an Arabic background (such as the Arabian Bottom and Arabian Hair items), and many of her attack names have Middle Eastern roots, such as names of ancient Sumerian, Babylonian, and other Mesopotamian gods (Enlil, Inanna, Namtar, Tiamat), and indeed Katsuhiro Harada, executive producer of Tekken, has said that she is "a female character from the Middle East who uses ancient assassination arts".

With her mysterious nature complimenting her strange fighting style, not much is given about Zafina's backstory, however, it is known that even as a child, Zafina's skills were unmatched. Being able to defeat groups of armed soldiers singlehandedly, she quickly rose in her clan's ranks, and was given untold secrets regarding who they were imprisoning. Using her skills as an astronomer, Zafina was able to predict the eventual destruction of the prison, the creature's subsequent release, and she entered to stop the two stars from colliding, and causing an apocalypse.

Although she maintains the profession of an astronomer, Zafina's abilities are not limited to astronomy or the use of her body, as an assassin, she is also quite skilled in the use of daggers, and she also can "sense" spiritual energy, determining whether or not the energy is hostile. Despite having fought a military group once as a child, her dialogues in the Scenario campaign suggest that the group she fought then would not be the only one she would fight, as she seems well acquainted the with the equally dubious Raven, having worked with or against him multiple times, while recognizing Dragunov from the Russian forces. 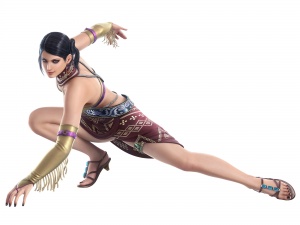 Zafina's fighting style is Ancient Assassination Arts. Zafina has moves that Director Katsuhiro Harada likened to that of a "spider". Zafina has three confirmed stances, the "Tarantula" stance, the "Scarecrow" stance, and the "Praying Mantis" stance. She has many moves for these stances, as well as many moves that can go into these stances. Some of the commands for Zafina's moves are "d+1+2" (goes into "Tarantula Stance"), ("Tarantula Stance") "4,3", "3+4" (goes into "Scarecrow Stance"), ("Scarecrow Stance") "3,4,4", "d+3+4" (goes into "Praying Mantis Stance"), and ("Praying Mantis Stance") "2,1,4". Also, d/f+2 is a high crush ([4]).

Prologue (In-Game Text)
Zafina was born into a family of evil vanquishers with a bloodline dating back to ancient times. With exceptional spiritual powers exhibited from a young age, she was raised as a warrior assigned to protect the royal family's grave. When that grave was attacked by a heavily-armed group from another country, Zafina dispelled the perpetrators single-handedly. In response to her successful defense, the family elder appointed her as the clan's sole assassin.

In her public life, Zafina used her spiritual powers as an astrologist. Evil omens started appearing in all of the fortunes she divined, and her uneasiness mounted, leading her to the elder for guidance. The elder revealed to her an ancient lore passed on to only a select few. According to legend, when two ominous stars come into contact, the magic seal that the family had protected for centuries would be broken and the world would end.

Upon hearing this revelation, Zafina set off to a land in the Far East, where the evil stars were expected to meet. It is her goal to stop them before the cataclysmic events can be set into motion.

Ending (Unofficial Synopsis)
After Zafina defeated Azazel, she emerges from the temple and encounters an old man, who is presumbly her guru. Neither say anything, as they both just nod their heads and go their own ways. The old man leaves the area, and Zafina returns to the temple, with the gates closing behind her. Afterwards, the whole site of the temple collapses. It is unknown of what happened to Zafina.

Scenario Campaign (Unofficial Synopsis)
Unlike the majority of the Tekken 6 characters, Zafina is not a boss in the Scenario Campaign mode. Instead, she allies with Lars Alexandersson (or another character of the player's choosing) and Raven to fight off an army of Tekken Force soldiers. After this, she gives them the location of the temple ruins that house Azazel.

Zafina will be featured as a playable character in Tekken Tag Tournament 2, a non-canonical Tekken game.

Zafina was born into a family of exorcists, with a bloodline dating back to the days of ancient dynasties. Gifted with superb spiritual powers from a young age, she was raised as a warrior assigned to protect the royal family's grave. She was ordered by the family elder to undertake assassinations alone. In accordance with the prophecy, "Two dark stars destined to shake the world shall confer, and ancient evil from the lowly depths will stir, bringing death to the world", she travels East to defeat the two dark stars, Jin Kazama and Kazuya Mishima[2].

Ending
'Zafina is seen checking some texts encrypted on the walls of a temple. She later senses armed men approaching. As one man attempts to shoot Zafina with the aid of his scope, she disappears. She later attacks and defeats all the armed assailants before examining the text once again