Determined and strong minded, Michelle Chang houses a deep love for her family and a vengeful nature towards those who threaten them. She pursues her goals with dedication. She also posseses a love for her enviroment, something which is assumed is passed on to her daughter, Julia.

Sometime before the events of Tekken 3, Michelle adopted Julia Chang while Julia was a baby. Michelle was also kidnapped by Heihachi Mishima for her pendant, which is why Julia entered the tournament. Heihachi planned to use her pendant to awaken Ogre in the Aztec Temple in which he was successful in doing. Even after Tekken 3, Michelle's whereabouts are still unknown. Michelle Chang is not a playable character in Tekken 3, but she does appear in Julia Chang's Tekken 3 ending, proving that she was still alive at that time.

Her title in the original trilogy is Wandering Female Warrior.

*only in Julia's ending 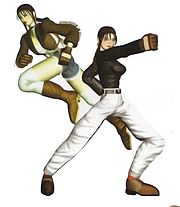 Prologue (Manual)
This wandering fighter is the daughter of a Native American woman and a Hong Kong man sent by Heihachi Mishima to find an ancient treasure on Native American land. Eventually, on her 18th birthday, she hears from her mother that her father had been killed by Heihachi's men. She is taking part in the tournament to take revenge on "Mishima."

Ending, "Mother" (Unofficial Synopsis)
Michelle has just returned from the Tournament and is walking home through the Arizona desert. She stops and drops her bag, seeing her mother sitting outside. Overjoyed, Michelle runs to her mother.

Kazuya wants the pendant that Michelle wears around her neck, since it carries the secret to a great treasure. Michelle's mother has now been kidnapped by Kazuya's men to ensure Michelle's participation in the tournament. Michelle vows to rescue her mother at all costs.

Ending, "Pendant"
Michelle approaches a lake in a forest with her pendant in her hand while a bird flies by. After a couple minutes of enjoying the nature while making her choice, Michelle tosses the pendant into the water. 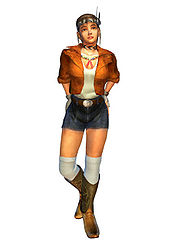 Michelle is shown sitting on the ground. Julia Chang walks up to her and sits down next to her. Then Julia and Michelle starts having an unheard conversation. This ending takes place in Eddy Gordo's second Tekken Tag Tournament stage, which is called "Eddy-B". 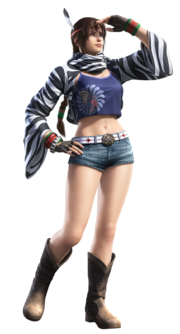 Gameplay-wise, Michelle moveset is very similar to Julia's from Tekken 6, with a few of her own unique moves from Tekken Tag Tournament returning.

Michelle is a half Chinese, half Native American character from Arizona that prefers to hunt and track down animals, like her distant relatives did. She also enjoys watching buffalo with Julia, her adopted daughter. Usually dressed in Native American style clothing complete with a suede vest and headband, Michelle has a pendant capable of awakening Ogre, an evil spirit that wants to destroy the earth. Ganryu, a sumo wrestler is smitten by Michelle but she finds him to be a pest, as does her daughter. [1]

Julia’s foster mother, and a kenpo practitioner. With the murder of her father, and kidnapping of her mother over a pendant handed down in her family, her fate is intertwined with that of the Mishima Zaibatsu. [2]

Julia's mother, and expert of kenpo. She has a deep and painful past with the Mishima Zaibatsu, after her father was murdered and her mother kidnapped over an ancient pendant[2].

Michelle is walking around the house; Julia is in the shower. Michelle comes across Julia's wrestling mask and seems interested in it. She tries it on. She smiles and says "Just a peek won't hurt." and poses in the mirror before trying a few moves. Julia then catches her mom posing. Embarrassed, Michelle tries to take the mask off but Julia says she looks great in it and gains an idea. The screen changes to show both Julia (as Jaycee) and Michelle (as a luchadora) beating King and Marduk. 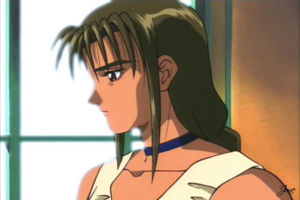 Michelle is young and filled with rage because her entire family was murdered by Heihachi Mishima. She is determined to get her revenge, no matter what the odds. This fierce passion is her greatest strength and her only weakness. She fought and overcame Ganryu during the Tournament, but was easily defeated by Kazuya Mishima. Just when Kazuya was about to end her life, Jun Kazama stepped in and saved her life. Later on as the Island is blowing up, she is seen being carried by Paul Phoenix.