Tiger Jackson (タイガー・ジャクソン Taigā Jyakuson) was introduced in Tekken 3, and he returned for Tekken Tag Tournament and Tekken Tag Tournament 2. He is "unlocked" by selecting Eddy Gordo with the Triangle or Start button (although Tekken 3 requires you to beat the game with seventeen unique characters first). Originally thought as an altenate-ego of Eddy, it is revealed in the Wii U version of Tekken Tag Tournament 2, which comes with a biography for each character, that they are different individuals citing the two are "...not at all related". Notably, in the Tekken 6: Bloodline Rebellion Artbook, which came coupled with the Tekken 6: Bloodline Rebellion Bundle, states that Tiger Jackson was originally an unused concept for Eddy Gordo not used for the final character.

Tiger does not have an official storyline within Tekken 3.

Ending, "Super Fly!"
Tiger is at a disco club dancing to some 1970's disco music. The scene ends with Tiger striking a pose.

Tekken Tag Tournament Tiger Jackson (on the left / laying on the ground.).

Ending (Unofficial Synopsis)
Tiger is shown pointing at the sky and saying something in what appears to be Ling Xiaoyu's stage. Then, he points to the sky with his other hand. He raises and lowers one of his hands, and then he raises and lowers his other hand. He spins around once in one direction. Then, he spins around again in the opposite direction. Finally, he points at the screen and grins. 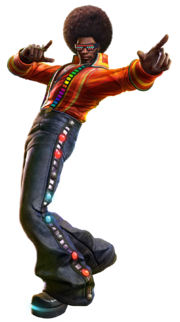 Story Tiger is a mysterious man who entered the "The King of Iron Fist Tournament" dressed in clothes inspired by the golden age of soul music. His polished capoeira moves look quite similar to those used by Eddy, but the nature of the relationship between these two fighters remains a mystery. [2]

This mysterious man, whose fashion embodies the essence of soul music, suddenly appeared on the stage of the King of Iron Fist Tournament. He share the same Capoeira skills as Eddy Gordo, but the two are not at all related[1].

Tiger does not have an ending, and thus is the only character in the game not to have one.