From Tekkenpedia
(Redirected from Dr. Abel)
Jump to: navigation, search

Dr. Abel is a mad scientist and minor character in the Tekken fighting game series.

He is the rival of Doctor Boskonovitch. He destroyed Jack-2, and he also reanimated Bryan Fury. He also attempted to destroy Gun Jack and kill Jane, but he was unsuccessful because Gun Jack created an energy shield that protected the two from the beam that Dr. Abel fired from space.

Though he does not actually make an appearance, it is assumed that he is the one that fires a beam from a satellite in space that destroys Jack-2.

He appears in both versions of Gun Jack's ending, where he attempts to do to Gun Jack what he did to Jack-2. However, he fails, due to Gun Jack generating a force field that protects himself and Jane from the blast. 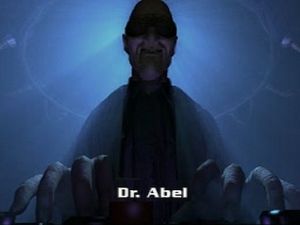 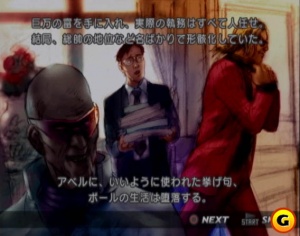 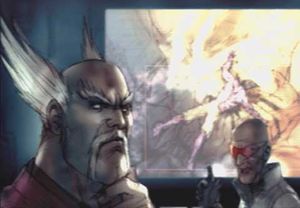 Dr.Abel in Heihachi's Tekken 4 Prologue (lower right)
Abel is shown on the second page of Paul Phoenix's epilogue, where it states that Abel's total control over Paul leads him to a life of depravity.He also shows up in Julia Chang's ending. He informs Julia about using her GENOCELL project and how it can help G Corporation's aid in the Devil-Human Integration Program. He tells her to join them in there research and Julia, believing it will lead to the end of mankind, successfully erases all of the GENOCELL data along with the Devil-Human Integration data. Angered by Julia's refusal and actions, Abel pulls a pistol on her and fires at her multiple times, but Julia evades every bullet and escapes. 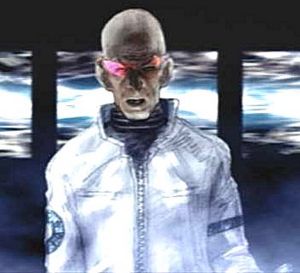 His most important role in Tekken 4 is in Bryan Fury's "Story" mode, where he appears in Bryan's Prologue and Epilogue. With his life reaching its end, Bryan knows that Abel is the only one that can help him. However, Abel abandoned him two years ago when he was recruited by the Mishima Zaibatsu to be its top scientific advisor. Bryan enters The King of Iron Fist Tournament 4 so that he can command Abel to modify his body. In his epilogue, he approaches the shocked Abel and knocks him across the room before he himself falls to the ground, unconscious. It is unknown whether or not Abel survives this.

Doctor Abel makes no appearances in Tekken 5 / Dark Resurrection. It is only briefly mentioned that he is the creator of Bryan Fury in his prologue.