Miguel's sister is an as-of-yet unnamed character from Tekken 6. She is the sister of Miguel Caballero Rojo and is described as "kind-hearted" in Miguel's Tekken 6 profile. She was the only person that Miguel ever trusted when he was fifteen years old, and he loved her more than anyone. She visited him secretly, without their parents knowing about it, and during one of these meetings, she told Miguel that she was to be married. Despite an outraged Miguel, she decided to go through with the marriage. During the wedding, a bombing raid by the Tekken Force commenced and the church where she was being wed turned into a blazing inferno after a bomb struck. Miguel, who had been watching the ceremony from outside, had witnessed the bombing and desperately tried to find her remains among the rubble from the church. She had already passed away by the time Miguel found her. Her death became the sole reason for Miguel to enter The King of Iron Fist Tournament 6. 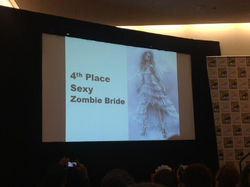