Violet (ヴァイオレット Vaioretto) is a character first introduced in Tekken 4 as a fighter identical to Lee Chaolan. After completing Story Mode, it's revealed that Violet is actually Lee in disguise, having gone undercover to try to claim the Mishima Zaibatsu for himself. He is Heihachi Mishima's adopted son and thus Kazuya Mishima's foster brother. After the death of his real parents, Lee was adopted by Heihachi to give Heihachi's son, Kazuya, a rival to inspire him to shape up. When Kazuya took the Mishima Zaibatsu from Heihachi, Lee decided to work with his brother. Considering the rather demeaning position he received (known by Kazuya as secretary), it can be assumed that he did so only to be in a good position to overthrow Kazuya should the chance present itself.

Convinced by Wang Jinrei, Lee fought in the second King of Iron Fist Tournament, his main intention being to snatch the Mishima Zaibatsu from Kazuya. However, Heihachi returned from his supposed demise, defeated Lee, and banished his adopted son from any aspect of his life or the Mishima Zaibatsu. For a time, Lee was consumed with rage and vengeance, very similar to that which Kazuya experienced. However, instead of letting the hatred consume him like it did Kazuya, he realized that it was a waste to murder an old man, who probably had only a few more years to live. He left for America, distanced himself from fighting and went into seclusion, amassing his large fortune in solitude. In the recent Tekken games, Lee's passion for fighting and his hatred for the Mishima clan was rekindled, and he enters the Tournaments to get revenge on his sworn rival, and become head of the Mishima Zaibatsu. His Violet persona has only appeared once so far (canonically).

As Violet, Lee maintains his usual look but chooses to dress in pink, purple or violet clothing and wears distinctive shades to help conceal his identity. His silver hair, parted in the middle, is also purple now. Other than that, Violet remains identical to Lee, even with his fighting stance. The only real difference is that Lee chooses to speak in English whilst playing as his alter-ego. However, he speaks Japanese in fight lab(with the excpetion of the ending.)

As Lee, his title in the original trilogy is Silver Haired Devil.

Prologue (In-Game Text)
Violet was the majority shareholder and de facto leader of a manufacturer for humanoid robots. He was apparently a fighter in the past, but now lived a quiet life in a mansion in the Bahamas. Bored by his carefree lifestyle, Violet decided to enter The King of Iron Fist Tournament 4.

There was another significant reason for his entry into the tournament. Violet believed that he could his humanoid robots into the ultimate fighting weapons. He believed in a utopian world where inorganic humanoids would carry out the will of their human masters.

Violet accelerated the development of a prototype for the Tournament. If completed in time, the tournament would be an excellent PR opportunity. Violet's mind was filled with visions of dominating The King of Iron Fist Tournament 4.

Interludes (Unofficial Synopsis)
Final Stage Combot: In the Arena, the crowd cheers for Lee, and he thanks them. He states that winning the tournament was not his ultimate goal, that he only participated in the tournament to gather test data for Combot, and to promote its application as the ultimate fighting machine. Then, he presents Combot, who is standing in front of the large electronic advertisement screen, to the audience. Lee asks Combot to give them a demonstration, and Combot's eyes start to glow bright red. Combot starts to walk down the stairs, but he trips and falls to the ground. A little bit of electricity comes from Combot's body as he gets up and Combot's eyes flicker. An angry and embarrassed Lee prepares for an unexpected fight as Combot starts to run towards him.

Epilogue (In-Game Text)
Lee won the tournament and finally achieved his dream of becoming the CEO of Mishima Zaibatsu. The first Combot had a fatal bug due to its hasty development. Lee transferred the Combot development project to the Mishima Research Labs, where he spent large sums of money and gathered many brilliant engineers to develop the second prototype.

Ending (Unofficial Synopsis)
A secretary walks into Lee's office, and tells him that the new Combot prototype is finished. She lays a book report titled "Combot II" on Lee's desk. Lee expects the new prototype to work better, and she tells him that combat experiments were conducted against Heihachi, and that from 10.23 seconds into the experiment, Combot unleashed a 99 hit combination. She reports that Heihachi was completely helpless. Lee chuckles and, while stirring his glass of brandy, says, "Excellent.". 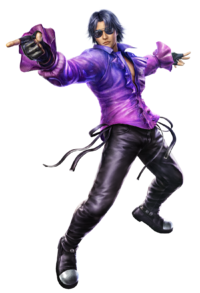 Violet will be featured as a DLC character in the console version of Tekken Tag Tournament 2. He also appears

The CEO of Violet Systems. Violet is famous in the business, with his trademarked sunglasses and purple hair. Apparently his business savvy at making Violet Systems into an enterprise is only matched by his fighting skills. He's put all of Violet System's resources into creating the new iteration of Combot--Super Combot[1].

Heihachi, Kazuya and Jin are all lying unconscious in a room. As they awake, Violet speaks to them through an intercom and tells them they have the honour of battling Combot. Combot then enters the arena and, despite their arrogance, manages to defeat all three Mishimas with ease. Suddenly, Jin transforms into Devil Jin and blasts Combot's head off, and Heihachi mocks Violet for the "disappointment". Violet remains calm and causes Combot to self-destruct, destroying Heihachi, Kazuya and Devil Jin in the process. Violet laughs and says "Excellent".