Asuka Kazama (風間 飛鳥 Kazama Asuka) is introduced in Tekken 5 and she has returned for all subsequent titles. She is mostly known to be a relative of the series' protagonist, Jin Kazama.

Before releasing the game in the Arcades, franchise developer, Namco released images of three new characters as part of their Tekken 5 promotions back in 2004. Amongst the new characters were Asuka, a Chinese Kenpo user named Feng Wei, and a mysterious ninja named Raven. Immediately afterward, speculation began to spread about Asuka's role in the story and her possible relation to Jin Kazama.

Asuka is surprisingly brash and arrogant. Though, her profile states that she breaks up fights regularly, she seems to have no qualms about fighting herself and even seemingly revels in it. In her story mode, after defeating her target, Feng Wei, she decides to remain in the tournament in order to "have fun". Her pre and post-match quotes also demonstrate her confidence. As stated in her Tekken 5 / Dark Resurrection prologue, Asuka is also known as being a "nosy kid" who likes to solve other people's problems, "usually by knockout". Asuka exact relation to Jun Kazama was initially speculated to be one of aunt and niece, but Harada further clarified that Asuka is neither Jin's cousin nor Jun's niece, and simply puts the two as "Relatives" to Asuka. She is the rival of Emilie De Rochefort, or simply Lili after defeating Lili during the 5th tournament.

It is also worth noting that Asuka speaks with a very heavy Kansai Japanese dialect (Kansai is a region of western Japan encompassing the cities of Kyoto, Osaka, and Kobe). 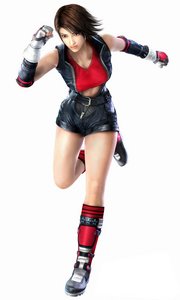 Prologue (In-Game Text)
Asuka Kazama. She was taught Kazama-Style Martial Arts by her fater. She was known as a nosy kid who liked to fix other peoples' problems, usually by knockout. Asuka came home one day to find that an unknown man had destroyed the dojo and put her father into hospital. A detective from Hong Kong tells her the man will be in The King of Iron First Tournament 5. This one's personal.

Interludes (Unofficial Synopsis)
Stage 4 Feng Wei: Asuka runs into Feng Wei and asks him if he has seen a "strange Chinese Kenpo fighter," not realizing that he is the one who she is talking to. Asuka begins to describe him. She realizes that she is talking to Feng Wei. He introduces himself. Asuka claims that he is her father's sworn enemy, and then the two begin to fight. After she wins she is exhausted after the fight with Feng. She admits that he is strong, but not strong enough for her. She then decides to stay in the Tournament, after she has avenged her father, to "have some fun."
Final Stage Jinpachi Mishima: Devil Jin is shown fighting Jinpachi Mishima. Frustrated, Devil Jin yells that he will take everything, running over to Jinpachi; however, Jinpachi easily knocks him out of the way. Asuka sees this and realizes that she will have to defeat Jinpachi herself.

Ending (Unofficial Synopsis)
Asuka defeats Jinpachi Mishima, who dissolves into dust. Meanwhile, the advanced effects of Devil Jin's transformation disappear (the horns and the wings are gone), leaving a half-transformed Jin. Asuka rushes to Jin and tries to revive him, wondering what she should do. Though she is unaware of it, her touch undoes the final remnants of the Devil Jin transformation, and Jin wakes up in his human state. Alarmed at his unfamiliar surroundings, Jin tries to stand up quickly, tripping over Asuka and landing face-first between her breasts, making them bigger with a "boing" sound effect. Enough time passes for a small rock to roll to the ground before Jin finally sits up. Asuka, embarrassed at first, immediately turns angry and demands Jin to explain himself. Jin, however, seems to be completely oblivious to the moment and continues to wonder where he is. Believing this to be a front, Asuka angrily power-punches Jin into a large rock, calling him a pervert as she does this, and then she stomps away angrily, leaving Jin to ask, "What was that all about?" Immediately after, a rock ironically falls on his head and knocks him out. 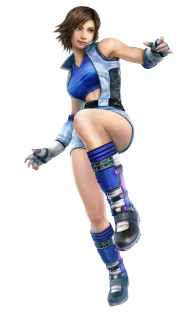 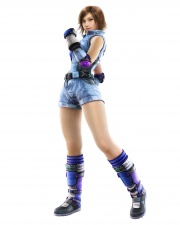 Prologue (In-Game Text)
Asuka participated in The King of Iron First Tournament 5 in order to fight Feng Wei, who had sent her father to the hospital, but was unable to find him. Lei Wulong, who had also been after Feng, returned to Hong Kong, leaving Asuka with feelings of discontent over the lack of closure. Nevertheless, Asuka's life had gradually returned to normal. However, those peaceful days quickly fell apart after conflict engulfed the globe. After learning that the leader of the Mishima Zaibatsu and the man behind the chaos, Jin Kazama, is a relative, Asuka decides to enter The King of Iron First Tournament 6 to defeat him.

Ending (Unofficial Synopsis)
Asuka is seen peddling, noting that she's going to be late for school. As she reaches her school's gate, a limo suddenly stops in front of her, causing her to fall, and lose her lunch. Asuka immediately approaches the limo, only to be surprised with Lili's arrival. When Lili sarcastically remarks at how her first day was ruined, Asuka reacts violently by shouting, "Are you some sort of idiot!" before throwing a punch. The ensuing fight between the two eventually causes Lili's driver to run away in fear.

Asuka will be featured as a playable character in Tekken Tag Tournament 2, a non-canonical Tekken game.

With an ingrained sense of justice, Asuka likes to split fights up before they start, earning her title of "Gang Mediator" in her hometown of Osaka. After Asuka learned that Jin Kazama, the infamous leader of the Mishima Zaibatsu that's wreaking chaos throughout the world, was her relative, she now strives to restore peace[1].

In the middle of the street, several men appear to challenge each other to a fight. Asuka intervenes and, having recognised her, the thugs back off in fear. They all apologize to her and she tries to get them to shake hands. However, she catches them staring at her cleavage and loses her temper, knocking several of them flying into the air. One of the remaining thugs mentions she is the "Gang Mediator" and can be annoying. Asuka kicks the thug and says she dislikes being called annoying. She then hears shouting from elsewhere and rushes off to sort them out, leaving the thugs behind to "play nice". 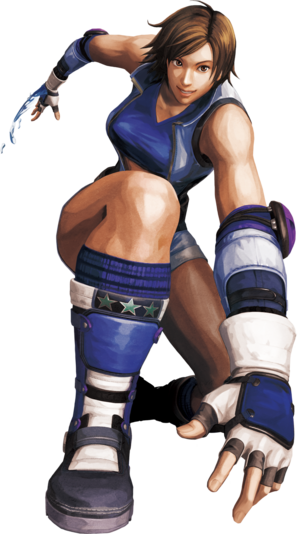 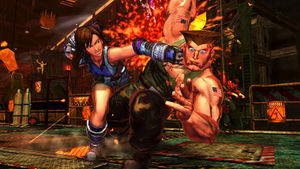 An Osaka-born girl who loves to stick her nose into other people's affairs, especially when it comes to fighting. Whenever she spots some roughhousing going on, she immediately enters the fray as a mediator without much thought. She has been taught the Kazama-style of martial arts, meaning she is no ordinary fighter. Asuka has a cheerful personality and gets along well with the locals. Her rival Lili has requested her assistance, so the two travel to the South Pole.

Despite heated arguments and battles with Asuka Kazama in the past, Lili appears before her rival. She haughtily requests that Asuka accompany her to the Antarctica, as she plans on retrieving Pandora for her father

Lili: Your primitive violent tendencies will be an excellent complement to my refined fighting prowess

Asuka: What the hell kinda invitation was that? You wanna fight or something?

Refusing Lili's offer was easy for Asuka but as news over Pandora began to grow she couldn't help but get excited, and eventually accepted Lili's offer

Asuka: Fine, I'm coming, whatever... I wanna check this box out anyway. But we're not partners and we're not friends. We're just two people going to the same place, got it?

Lili: I knew you'd come around. Soon we will become the greatest fighting duo in the world!

Asuka: We're not a fighting duo! You're not even listening to me are you?

Asuka (towards the back) alongside the other seven starting characters. 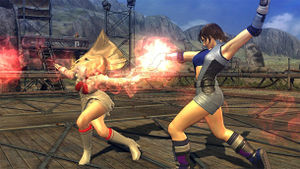 Asuka facing off against Lili.

Asuka is featured in the free-to-play online game Tekken Revolution as one of the starting eight characters. As with the rest of the cast, her appearance and moveset are carried over directly from Tekken Tag Tournament 2.