From Tekkenpedia
(Redirected from Bob)
Jump to: navigation, search

Robert Richards (ロバート·リチャーズ Robāto Richāzu), better known as his nickname "Bob" (ボブ Bobu), (not to be confused with "Bob":, Boy on bike, Hwoarang's nickname), was introduced in Tekken 6 and he returned for Tekken 6: Bloodline Rebellion. Bob is a renowned martial arts prodigy from the USA. His fighting style is Freestyle Karate. Freestyle Karate originated from America and it is a generic term regarding a system of techniques based on numerous traditional styles of Karate while not following the restricting philosophies of each respective styles.

A once charming and slim fighter, Bob participated in numerous tournaments and was not only beloved by the fans, but also by the spotlight. With immeasurable speed, Bob's only flaw was his lack of power, causing him to suffer greatly when fighting against opponents heavier and larger than himself. Determined to triumph, Bob increased his body mass by fattening himself, but also making sure that he would not lose his speed in the process. Successfully reforming, Bob made a surprise reappearance in a recent martial arts tournament, dubbing himself as "The perfect combination of speed and weight". The crowd, however, did not see eye to eye with Bob, and simply thought of his current appearance as someone who was a shadow of himself. Not to be affected by such rumors, Bob immediately entered the King of Iron Fist Tournament to return to the spotlight, and prove that his combination would be supreme.

A man with great pride in his body, Bob has never heeded any comment in regards to his unsightly appearance, only focusing in maintaining the balance that he created between his power and speed. Following this, Bob is also someone who aspires to help people as much as he can. This has led to various cutscenes depicting Bob fighting, bank robbers and kidnappers, fleeing criminals and various thugs and bullies. 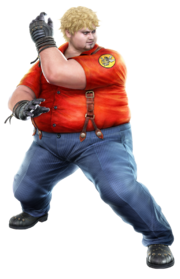 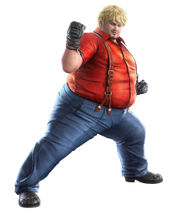 His fighting style is Freestyle Karate. Bob has a Mishima style wavedash and Bob can juggle off his d/f+1+2 throw. Bob's moves mainly consists of acrobatic moves such as multiple spinning and alternating combos of punches, kicks and body checks.

Prologue (In-Game-Text)
Bob had always been very serious about his training. He was hailed as a master of martial arts from a very young age, and he garnered many fans with his chiseled body and good looks. However, he could not defeat opponents who were larger than him. He vanished from the martial arts scene and dedicated himself to a special training regimen that increased his power and weight while maintaining his agility.After several years in seclusion, Bob returned to the fighting world a changed man. Those who know Bob were astonished by his transformation. His handsome looks were gone and he gained a disproportionate amount of weight. Bob paid no attention to his critics, and relied on the benefits of his training: speed, power and unyielding weight. He decided that he was ready to return to competition; he joined The King of Iron Fist Tournament 6 to test his martial arts abilities once again.

Ending (Unofficial Synopsis)
After winning the tournament, Bob became a sensation. He was shown on television and for magazine interviews. Unaware of this, Bob becomes thinner. He weighs himself, turning out to weigh 150 pounds - he had lost weight without even knowing it. He screams in frustration, bangs his head on the wall, and makes a big hole. Then he is shown lying on the floor. 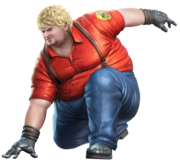 Bob will be featured as a playable character in Tekken Tag Tournament 2.

Heralded as a master of the martial arts, Bob's chiseled body and handsome face gained him many fans. However, he could not win against larger opponents, so he vanished from the martial arts scene to pursue his regimen of increasing power and weight while maintaining agility. After several years, Bob returned, and those who knew him were shocked and disgusted by his transformation. However, Bob ignored their judgemental looks, and was very proud that he had attained the perfect combination of speed, power, and weight[1].

While Bob is walking on the street, he finds a group of thugs hassling small children into giving their money. He then dons a superhero's outfit and appears before the thugs shouting "Speed and Weight!". The thugs, however, don't seem threatened by him and one of them even calls him a traffic sign. Bob, however, saves the children and defeats all four thugs with little effort. Soon he and the children shout "Speed and Weight!", but soon Bob hears a woman crying for help. When he arrives he sees the woman about to fall off from her window. Bob quickly thinks fast and takes a cable from a nearby man. He then ties both ends on two fire hydrants and turning it into a slingshot. Bob (with the help of the children he just helped), soon shoots himself at the direction where the woman is falling and catches her before she lands on the ground. To his shock, however, the frontline of the following day's newspaper shows that his identity as the superhero had already been revealed.

Bob is featured as an unlockable character in the free-to-play online game Tekken Revolution. Alongside JayCee, he was added in the Valentine Campaign update on February 12, 2014 ([3]). As with the rest of the cast, his appearance and moveset are carried over directly from Tekken Tag Tournament 2. 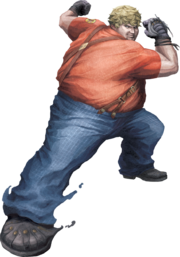 Bob will be featured as a playable character in Street Fighter X Tekken.

A man renowned as a bounty hunter who developed his body to immense proportions in order to fight larger opponents. While others vehemently disagree, Bob believes that he now has the "perfect body". He is extremely smug, and is stoic in the face of adversity. Julia, worried that the box may be used for evil purposes, hires Bob to travel with her to the South Pole.

A member of a pro-environmental group informs Julia of the box within the fallen meteorite. Worried that the power the box possesses may be used for evil purposes if it fell in the wrong hands, she decides to travel to the Antarctic herself. However, with numerous researchers and agents, not to mention both the Mishima Zaibatsu and Shandaloo pursuing it, going alone would be suicide. Then Julia Sees an unusual man in a local newspaper...

Bob Richards, the man known across the country as "Bob... The Bounty Hunter with Bling", happily takes on Julia's request.

Bob: So you want me to track down a box? Whatever, a job's a job.

Julia wonders if this man even knows the dangers involved with confronting both the Mishima Zaibatsu and Shandaloo? Despite the uncertainty, she extends a hand in friendship.

As Julia and Bob are walking Rufus spots Bob and shouts that he can't escape him with Zangief trying to tell Rufus that Bob isn't Ken Masters. As the two are arguing Julia wants to leave but Bob is extremely interested on fighting "someone of his own kin"

The two report to the press that a giant light appeared from the box and the discovery was so important that it made headliners for a newspaper. Julia gives Bob the payment, but he politely refuses and says that he was there for the experience. Julia later comments that Bob was actually charming to which he comments "is a start".

Retrieved from "http://eng.tekkenpedia.com/index.php?title=Robert_Richards&oldid=82944"
Categories:
Login to remove all ads