Eleonor Kliesen (エレオノール・クリーゼン Ereonōru Kurīzen), better known as Leo (レオ Reo) is a character in the Tekken fighting game series. Leo first appeared in Tekken 6, and returned in the subsequent update Tekken 6: Bloodline Rebellion. Leo made her first appearance in the official Tekken 6 trailer, where Leo was fighting Armor King. [1] Leo is an orphan, having lost both parents under circumstances that the police were not willing to investigate further into.

She has light blue eyes and short, blonde hair. Her first outfit consists of a buckled shirt, along with a red, white and black jacket. She wears a red scarf with an anchor-like pendant, with matching red gloves. She wears a pair of blue jeans and brown boots. Her P2 outfit contains something much more formal, which consists of a white, long-sleeved shirt with matching white pants and white gloves.

Bājíquán is a Chinese martial art that features explosive, short range power and is famous for its elbow strikes. The style focuses on being more direct, culminating in powerful, fast strikes that will render its opponent unable to continue.

Leo is intended to be a character who can be played by beginners and experienced players alike. 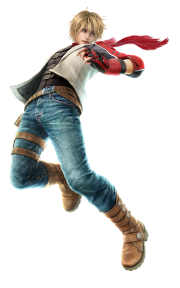 Prologue (In-Game Text)
Leo was part of a very talented family. Leo's father was a world-famous spelunker while Leo's mother served as a G Corporation executive. Although Leo's father disappeared during an expedition when Leo was a child, Leo still wanted to follow in the family tradition and become a spelunker. Leo possessed a strong sense of character, thanks to a proper upbringing. Life was pleasant and relatively uneventful until one fateful day when Leo's mother was killed by an unknown assailant. Depressed and filled with grief, Leo became incensed when the police called-off their investigation quickly and without explanation. Leo vowed to find the truth. During Leo’s own investigation, the G Corporation's Kazuya Mishima materialized as a person of interest. The G Corporation was popularized at the time as a world hero, making it difficult to get close to Kazuya, and it looked as though Leo’s quest had reached an insurmountable impasse. It was at this time that news of the Mishima Zaibatsu-sponsored The King of Iron Fist Tournament began to spread. Leo learned that Kazuya Mishima was scheduled to appear in person at the event. Realizing that this may be the only chance to take revenge against Kazuya, Leo decided to enter the contest.

Ending, A Letter (Unofficial Synopsis)
Leo walks up to her mother's grave with a bouquet of flowers. She notices a letter for her with a single lily. Leo reads the letter, then she gasps and quickly turns around, only to reveal that she is alone there. Leo sighs and looks up to the sky. It is possible that the letter was written by her father, which could possibly mean that he is still alive. 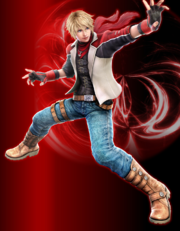 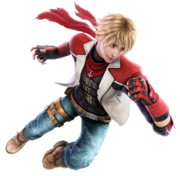 Leo will be featured as a playable character in Tekken Tag Tournament 2.

Leo is seen on a train that seems to belong to G Corporation. It is shown that a man is using a laptop in one of the rooms in the train before he leaves the room. Leo sneaks in and uses the laptop to find information about her mother. She learns that her mother was once a supervisor for the Mishima Zaibatsu's devil gene program. The cells of the devil gene merge together with a normal person's cells, so the Mishima Zaibatsu created a synthetic strand to use. The program was canceled after various fatalities of the test subjects. Emma had also reported the "death" of NT01. Suddenly, while Leo was saving the information in a USB, the man comes back and notices someone in the cabin before arming himself and entering. Leo manages to get back on the train's top through the window, only to be surrounded by three armed men. With determination, she swears that she'll find her mother's murderers and she jumped off the train, that appears to be crossing a bridge over a lake. On her way down, Leo fires a hook that grips on the ledge.

Leo is featured in the free-to-play online game Tekken Revolution, as one of the first four unlockable characters. As with the rest of the cast, her appearance and moveset are carried over directly from Tekken Tag Tournament 2.

Retrieved from "http://eng.tekkenpedia.com/index.php?title=Leo_Kliesen&oldid=83665"
Categories:
Login to remove all ads