Feng Wei (馮威 Féng Wēi; Japanese: フェン・ウェイ Fen Wei) was introduced in Tekken 5, and has returned for Tekken 5: Dark Resurrection, Tekken 6 and Tekken 6: Bloodline Rebellion. He is a Chinese Kenpo master. As a disciple of the "God Fist" style, by 20, Feng was the top student in his dojo. He killed his master because he scolded him for fighting outside the school. Feng enters The King of Iron Fist Tournament 5 to retrieve the "Secrets of God Fist" scrolls, which were stolen by the Mishimas (revealed to be Heihachi Mishima in Lei Wulong's epilogue).

He destroyed many dojos throughout both Japan and China. Those are two of the reasons why Lei Wulong wants to arrest him (the third reason being that Feng attacked many of his close friends). Lei enters the tournament to defeat and arrest Feng for his crimes. One of the dojos attacked belonged to Asuka Kazama's father, who was hospitalized after the attack. Asuka enters to defeat Feng as a way of avenging her father. Lei and Asuka will be encountered in Feng's Story mode as his sub-bosses at Stage 4 and Stage 7, respectively.

Being a once great student of an unnamed sifu, Feng was heralded as the best of his class, with his only flaw being his uncontrollable urge to fight. This urge would eventually get the better of Feng, eventually causing him to kill his master, and cause a rampage throughout China and Japan, destroying dojos, and defeating their masters. Eventually, when Feng did stop his attacks, he began finding the lost Divine Fist Scrolls that were stolen by the Mishimas. However, his discovery of the scrolls wouldn't end his journey just there. As he was unable to truly decipher the scroll, Feng decided the follow the single line, which he believed would bring him to become a Divine Fist practitioner, to " destroy all other fighting styles". With a new tournament announced, Feng decided to set forth to the tournament, with the intention of achieving his goal.

Within the series, Feng believes in becoming the strongest fighter ever. Through this, he believes that he must achieve total victory over any opponent, no matter how badly he wounds them. Despite this, Feng is actually very gracious in accepting losses. He also determines whether or not his opponents are "weak" or "strong", only giving time or attention to whoever is "strong" enough. During his time in China, Feng has heard of numerous martial artists hailing from both Japan and China, such examples would be both Lei Wulong, who people hailed for his knowledge in 5 form Kung Fu, and Wang Jinrei, who has also heard of Feng killing his master but still notes that Feng was still a very talented prospect, and awaits a match with the younger man. In regards to his various attacks, Feng has earned notable hatred from both Asuka Kazama and Lei Wulong. To the former, however, he shows considerable lack of concern or care, deeming her father weak, a complete contrast to his attitude regarding both Lei and Wang. In spite of these numerous flaws, Feng is still someone who treats fights and training with the utmost concern, declaring, in his interlude, that it would be disrespectful to not fight seriously. Though he killed his master, Feng didn't seem to completely hate his master, in fact, it may have actually been the opposite, as Feng still refers to the sifu as his "master", and his dialogue with Wang actually implies that Feng's master, let Feng kill him in fair combat. 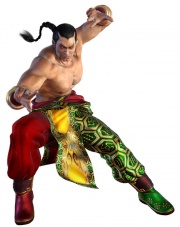 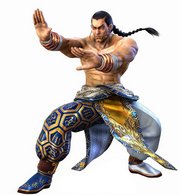 Prologue (In-Game Text)
Master of Chinese Kenpo, Feng Wei continues training on his path to becoming the strongest fighter alive. As a young boy, Feng Wei began training under a Kenpo master who was so skilled he was known as Shinken, or one who possesses 'Divine Fists'. As he matured Feng Wei became, without a doubt, the strongest fighter at his dojo. In his quest to be the strongest, however, he broke the dojo's rules forbidding competition outside. When his master tried to interfere, Feng Wei killed him. It is during this confrontation Feng Wei learns that, in order to truly master the art, he must learn the secrets hidden in the Shinken scrolls that were stolen by the Mishima clan. Feng Wei enters The King of Iron Fist Tournament intent on recovering the secret scrolls.

Interludes (Unofficial Synopsis)
Stage 4, Lei Wulong: Lei tries to place Feng under arrest, but Feng is interested in Lei's 5 Form Kung Fu (seeming to recognize him) and fights him. After winning, however, Feng claims that Lei's style is inferior to his own.
Stage 7, Asuka Kazama: Asuka accuses Feng of attacking her father, but Feng defeats her. Asuka then tells him that the way he treated her was disrespectful, although Feng tells her that not fighting seriously would be disrespectful.
Final Stage, Jinpachi Mishima: Feng asks Jinpachi about the Shinken scrolls, but Jinpachi denies knowing anything about them. Feng prepares to fight in order to get the information he wants.

Ending (Unofficial Synopsis)
Feng Wei defeats Jinpachi Mishima, and then Jinpachi dissolves into dust while Feng watches. Feng notices a glowing scroll laying on the ground, and finding it entitled, "Secrets of the Dragon Fist". Later, he opens the glowing scroll, in which, an embodiment of a dragon appears. Later, Feng is seen near a mountain chain, and he promptly strikes it with so much force, that the entire chain shatters. The camera closes as it zooms in on Feng's eyes which show dragon-like pupils. 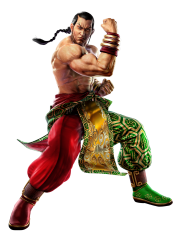 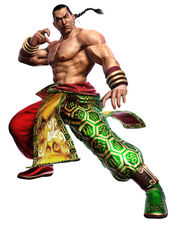 Prologue (Official Site)
Feng Wei joined The King of Iron Fist Tournament 5 to recover from the Mishima Zaibatsu the “Shinken” scrolls, secret records of the mystical Art of the Divine Fist. He broke into the Mishima Zaibatsu's secret vault and retrieved them. Rather than secret techniques, Feng was surprised to find-out the scrolls were devoid of detailed fighting instruction; but, rather, contained only one teaching: ”The one who destroys all other fighting styles and makes them his own shall become a warrior superior to all men, the Dragon God.” After the Tournament, Feng spent his days traveling the globe and fighting against warriors of various martial arts styles. One day he heard rumors of The King of Iron Fist Tournament 6. Seeking to expand his power, he headed for Japan to join the competition once again.

Ending (Unofficial Synopsis)
Feng is seen at an active volcano meditating. Just then, a ball of lava erupts out of a geyser, and responds by striking the ball, solidifying it. He then clasps his hand as the boulder falls, and he takes a deep breath. 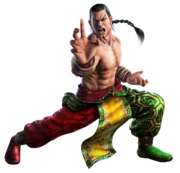 Feng Wei and a defeated Heihachi.

Feng will be featured as a playable character in Tekken Tag Tournament 2.

Under the training of a "God Fist" Chinese kenpo master, Feng Wei strives to be considered the strongest amongst his peers. But in his selfish search for power, he participated in a match against a rival school and ended up killing his master. Written within the Secrets of the God Fist scrolls, stolen from the very vaults of the Mishima Zaibatsu, was this massage: "The one who destroys all other fighting styles and makes them his own shall become a warrior superior to all men, the Dragon God". Following this teaching, Feng spent his days traveling the globe, fighting against warriors of various martial art styles[1].

Feng is seen practicing by holding bowls of water on his joints as well as his head. Asuka later appears and shouts at him for taking the Kazama dojo's sign. She attempts to attack Feng, but is pushed away while Feng resumes him training. Asuka attempts to attack once again, but Feng pushes her away again, and resumes his training. Later Asuka reveals that she has managed to destroy all of Feng's bowls, and decides to take back her dojo's sign. While leaving she is confronted by an angry Feng as the screen fades to black.

Feng is featured in the free-to-play online game Tekken Revolution as an unlockable character, added in the September 4, 2013 update ([2]). As with the rest of the cast, his appearance and moveset are carried over directly from Tekken Tag Tournament 2.