Miguel Caballero Rojo (ミゲル・カバジェロ・ロホ Migeru Kabajero Roho) was introduced in Tekken 6, along with Zafina, Leo, and Bob and has returned for all subsequent titles. He was referred to as "Manly Man" before his real name was confirmed.

Nothing much is known of Miguel yet, as he has only been featured in the last two recent Tekken games. He is a rather blood-thirsty and rebellious character, whose reckless nature can be seen as both his weakness and his strength. Miguel is depicted as an undisciplined Spaniard with a very intense passion for fighting, which often brought him into conflict with others. Despite being born in a conservative family, his wild and unruly nature made him the black sheep.

Despite his negative side, Miguel is shown to be capable of love, especially in the case of his sister, whom he grew to trust and treasure. However, his extreme over-protective concern for his sister made him consider killing his future brother-in-law, though he decides against it for the sake of her happiness.

Miguel has also been frequently described as the alpha male in the series due to his big, towering figure and his oppressive aura of anger and power. Most of his customization options feature the theme of manliness, like muscle shirts, unzipped leather coats, and facial hair, and his outfits prominently feature his muscular and chiseled figure. Making use of his brutal strength and raw muscle-power, he brawls his way out of any fight. His self made "style", consisting of no-holds-barred, underhanded techniques such as brutal body checks, vicious headbutts, crushing hay makers and splitting leg swipes, confuses and disorients opponents with wild, powerful blows. 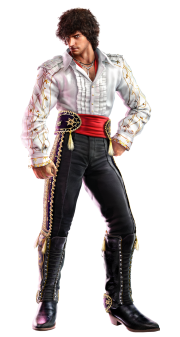 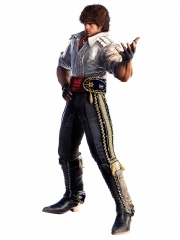 NAMCO stated that Miguel has no formal martial arts training and that he does not use or follow any formal style or discipline. Instead, he brawls his way out of any fight. His moves consist of no-holds-barred, underhanded techniques such as crushing hay makers, vicious headbutts, brutal body checks and splitting leg swipes. It has also been confirmed that Miguel has a special stance. One of his stances is called "Savage Stance". Some of the commands for Miguel's moves are "1,2,4", "f,f+2", "d/f+1,1~F (goes into "Savage Stance")", "("Savage Stance") b+1,2", "FC d/f+2", and "d/f+1+2". The command for Miguel's unblockable move is "f+3+4~F". For this move, Miguel walks towards his opponent slowly while putting a hand over his mouth and laughing (this is one of Miguel's taunt moves). Then, Miguel performs a quick downwards punch with the hand that he used to cover his mouth with. This move is a one hit KO if it hits unhindered, and takes away 75% of health bar if hit as it connects .

Prologue (In-Game Text)
Miguel lived his life as a lone wolf and detested the idea of answering to anyone. Despite being born into a conservative family, his wild and unruly nature made him a black sheep in the family. The discord between Miguel and his parents caused him to run away at the age of 15 and take residence at a bar owned by an acquaintance.

In spite of his family dysfunction, Miguel kept in contact with his younger sister, who he grew to trust and treasure. On the darker side, Miguel’s over-protective concern for his sister was extreme... He almost wanted to kill her boyfriend when he heard the news that they were to be married. On the day of the marriage, Miguel was unable and unwilling to stand with his parents and participate in the service. Instead, he watched from outside the church. Looking around, Miguel noticed the sky was blue as far as the eye could see and the planes overhead seemed to be a serene part of the festivities. Then suddenly, a blast of intense heat engulfed the area. Miguel was knocked back and sustained intense pain throughout his body, but rushed to the church to search for his sister.

When he found her, her dress was stained crimson red and air no longer filled her lungs. Miguel's screams echoed through the smoldering rubble that was once the church. After hearing that the aerial attack had been the work of the Mishima Zaibatsu, Miguel gave-in to dark thoughts, loathing and hatred, and swore revenge upon Jin Kazama.

Ending, "An Angry Wolf" (Unofficial Synopsis)
Miguel is shown running towards Jin Kazama. The Tekken Force stalls Miguel, but he defeats every member that stood in his way. Jin Kazama takes off in a helicopter; Miguel tries to grab onto the helicopter but unfortunately falls and screams in agony as Jin escapes.

Scenario Campaign (Unofficial Synopsis)
In the Scenario Campaign, Miguel is a boss at the South Bay Warehouse Area. Also, in this mode, Miguel, Baek Doo San, and Hwoarang lead a "Resistance" to fight against Jin and the Mishima Zaibatsu.

Miguel vs Jaycee and Asuka.

Miguel will be featured as a playable character in Tekken Tag Tournament 2, a non-canonical Tekken game.

Despite being born to a strict family, Miguel was always brash and eager to start a fight, and so he left home at the age of 15. The only one Miguel could trust was his younger sister, who cared for him and met him in secret, away from their parents. On the day of his sister's wedding, an aerial attack from planes flying over the church took her life, leaving her dress stained with fresh blood... After learning that the aerial attack had been the work of the Mishima Zaibatsu, Miguel swore to take revenge upon Jin Kazama[1].

Miguel is seen beating up various thugs at once in an alleyway. As he defeats two, he corners the last one intending to give him a beating as well. However, a girl comes in and protects the last thug while looking at Miguel. Miguel looks into the girl's eyes and is reminded of when his sister was killed (the same scene that was played in Tekken 6's opening) and releases his grip from the thug. Miguel then turns around and kicks the floor in disappointment.

Miguel is featured as an unlockable character in the free-to-play online game Tekken Revolution. As with the rest of the cast, his appearance and moveset are carried over directly from Tekken Tag Tournament 2.

Miguel is portrayed by Roger Huerta. He is the only Tekken 6 character to appear in the film, and is renamed "Miguel Rojo". He participates in the Iron Fist tournament and faces Jin Kazama. Despite holding his own rather formidably, he is defeated by Jin when he crushes his leg and is beaten unmercifully, nearly killing him.