Devil Jin (デビル仁 Debiru Jin) was first introduced in Tekken 5 and has returned for every subsequent game. Though Devil Jin made his first playable appearance in Tekken 5, he made his first non-playable appearance in Tekken 3 in Jin's ending. Devil Jin is Jin Kazama consumed by the Devil Gene, passed on to him by his father. According to Devil Jin's Tekken 5 prologue, Jinpachi Mishima, escaping captivity when Hon-Maru fell, triggered the evil that had been building up inside Jin.

His appearance is very similar to that of his human form with added inhuman traits including horns, wings, tattoos, a bone like horns protruding from his forearms, and light yellow irises. Many of Devil Jin's outfits have him wearing generally black pants, with his right leg having a flame graphic on it, covering up to his mid-thigh section. Devil Jin wears gauntlets coloured the same as the flame on his pants and shoes coloured the same the respective leg.

Although Devil Jin made repeated cameos and hints during Tekken 3 and Tekken Tag Tournament, his very first full appearance would occur in Tekken 4. Jin had received a portion of the Devil Gene from his father during the events between Tekken 2 and 3, resulting in his trademark tattoo. As Kazuya was reintroduced into the series, he would give more backstory to Devil Jin's origin. Kazuya notes that when he was revived by G-Corporation, part of the Devil Gene was forced out of his body because of his death at the hands of Heihachi, the gene would eventually find Jin Kazama, still a fetus within Jun Kazama, but was defeated by her, yet was inevitably able to enter Jin after Jun's disappearance.

Devil Jin's official debut occurred with Tekken 5, where he not only acted as the game's penultimate boss in the arcade run but also featured the return of Jin's forgotten Mishima Style Karate.

As Jin does not have as much control over the Devil Gene as his father or grandmother, Devil Jin's presence is often due to an involuntary transformation. It can be assumed that should Jin reach an extreme emotional state, or be severely wounded or defeated, he will transform into Devil Jin, and will typically be unconscious of actions done in this state. Having been utterly consumed, Devil Jin's main purpose is to absorb energies belonging to great beings such as Azazel and Jinpachi. Despite the Devil Gene being seemingly in full control of Jin's actions, one notable point is that there are two things that will cause severe trauma to Devil Jin. The first is the presence of the Kazama's purification powers. Devil Jin's dialogue with Asuka, as well as his win pose with Jun seem to hint that their purifying powers are hampering with the Devil Gene's control. The second are people who Jin believes are important. As such, despite not having any purifying powers, both Hwoarang and Xiaoyu can cause extreme pain to Devil Jin as shown in the Scenario Campaign.

As of yet, Devil Jin's only "match" was against Hwoarang, after the latter had seemingly defeated Jin. It is currently unknown if Devil Jin will make more canonical appearances in Tekken's story, as Jin progressively shows more control over the Devil Gene.

Prologue (In-Game Text)
When the devil gene takes over Jin Kazama... Jinpachi was able to escape captivity as Hon-Maru fell. This triggered the evil that had been building up inside Jin. Two months later... evil has completely consumed Jin's mind and a deadly force has awakened...

Interludes (Unofficial Synopsis)
Stage 8 Asuka Kazama: Devil Jin tells Jinpachi to give "it" to him. Jinpachi replies saying that Devil Jin has no manners, thus he should die. Asuka then steps in, trying to find out what's going on. At first, Devil Jin only slightly turns his head in her direction but then averts his gaze. Asuka insists on not being ignored and pleads with him to listen to her. Devil Jin laughs at her, tells her to shut up, calls her "insignificant", and asks if she thinks she can stop him. Asuka admits she does not know what is going on but feels Devil Jin's a bit too cocky. She makes a rude bent elbow gesture at him and says she'll put him back in his place. Devil Jin then consents to allowing her to go first. After defeating Asuka, Devil Jin looks down on her and says that she has no right to interfere with their plans.
Stage 9 Jinpachi Mishima: Jinpachi calls Devil Jin a fool and that he cannot defeat Jinpachi after giving in to the Devil. Devil Jin seems genuinely confused by the notion and says Jinpachi does not understand and that he has taken full control of the Devil. Jinpachi replies that he must make that power his, and the two fight.

Ending (Unofficial Synopsis)
After having defeated Jinpachi, Devil Jin picks him up and absorbs his power, causing Devil Jin to mutate. Devil Jin's muscles expand suddenly, bursting through both of his gauntlets. His horns and wings grow longer, and he is covered with long fur. His power becomes so massive that it triggers a violent explosion, Devil Jin stands in the center of it, howling.

Devil Within: Devil Jin is featured in the "Devil Within" side game in Tekken 5. While the player controls Jin Kazama, they are given the opportunity to change into Devil Jin by pressing the "L1" button and the "Triangle" button at the same time when the "Devil Gauge" is full while using Jin. As with the regular modes in Tekken 5, Devil Jin's moves are quite different than Jin's in Devil Within. 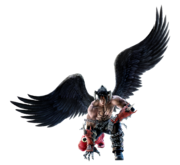 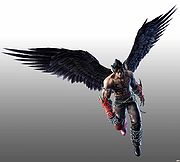 Prologue (In-Game Text)
Under the control of the devil gene, Jin Kazama's power rivals that of a demon.

Ending (Unofficial Synopsis)
Devil Jin has defeated Azazel. He then retrieves Azazel's orb, which absorbs his devil power and he turns him back to his normal state. Zafina, who was standing nearby, picks up the orb and carries an unconscious Jin outside. She returns to temple with the doors closing behind her, and the site collapses. 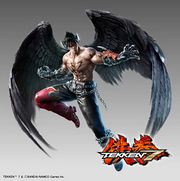 Devil Jin was confirmed to return as one of the first set of time release characters alongside Josie and Jin. Prior to the official announcement, his render was leaked. He was officially added into the game on April 7, 2015.

Aside from retaining many of his exclusive commands, he has received new moves coming from Angel.

Devil Jin will be featured as a playable character in Tekken Tag Tournament 2.

Under the control of the Devil Gene, Jin Kazama's power rivals that of a demon. He will stop at nothing to fulfill his motives[1].

Devil Jin is flying higher with incredible pain in his head as images of both Jun and Unknown run through his mind. He manages to reach space and while looking down on Earth, is hugged by an image of Jun. Later Jin is seen unconscious on a beach being taken care of by a few Tekken Force members

Devil Jin is featured in the free-to-play online game Tekken Revolution as an unlockable character, added in the August 9th, 2013 update as part of the Summer Campaign ([1]). As with the rest of the cast, his appearance and moveset are carried over directly from Tekken Tag Tournament 2. However, his laser firing moves have received aesthetic changes, with the beams having increased in size.

Devil Jin appears towards the end of the movie but during this time, Jin can already control his devil gene as he was shown with full control in the movie. He used the transformation after Devil Kazuya taunted him. He first starts in a monster-ish form and devil Kazuya is still winning the fight. But after a while he transforms to a humanoid form and is able to defeat Kazuya. He then talks to Xiaoyu and leaves off into the distance as Devil Jin.

Though he himself is not in the game, Devil Jin's fighting style is available to all created characters, both male and female, in Soul Calibur V. It is labeled under "Devil Jin (Tekken)", and is represented by Jin Kazama's trademark tattoo.