Mokujin was introduced in Tekken 3, and returned for all subsequent games (with the exception of Tekken 4).

Mokujin has no fighting style of his own. Instead, he chooses the fighting style of another character that is competing in the current tournament and uses it. Mokujin changes fighting styles after every round, although it will occasionally use the same fighting style two rounds in a row. In addition to this, Mokujin will mimic the pre-fight and win animations of whomever it is mimicking, but it will not make any sounds during them, because of its inability to speak.

Mokujin was the first fighter in the series with mimicry, with many other fighters mimicing fighting styles after that. Mokujin is the wooden version of Tetsujin, whose only playable appearance thus far is in Tekken Tag Tournament.

Mokujin's complete background aside from coming from a thousand year old oak, called out to fight supernatural evil, is completely unknown. Mokujin however confirmed that he had been around for hundreds of years and had known many abnormal powers including those belonging to Jun Kazama, and remembering who Azazel was before it could say it's title as the rectifier. Mokujin often surprises others by talking to them through telepathy (as revealed in the Scenario Campaign) as well as having his own form of communication by making sounds of something knocking on wood. He is often surprised at how humanity has always acted in times of crisis. He wonders at how humans could cause many major conflicts, but still had the power to mend things. He often judges people based on the type of spirit they give off, and he reveals that he can actually "sense" things through aura. The same cannot be said to those who generally meet him as they all think that Mokujin is nothing more than an abnormal training dummy except for a few. It is believed in past folklore that if the world would be on the brink of collapse due to the presence of a supernatural being, then Mokujin would appear. The only ones who are confirmed to have known this were Wang, Feng and his master, all of which revere Mokujin as something of legend. Despite being called legendary, Mokujin always wonders whether or not he is actually needed due to him being labelled as something abnormal. He does however believe that if there are people who are still fighting for a just cause and have a capable aura and spirit, then he still has purpose in the world

His title in the original trilogy is Wooden Person.

* - controlled by Pac-Man, in one character. 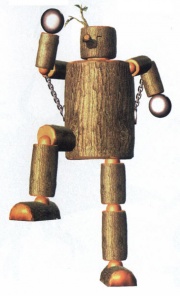 Prologue (Manual Text)
Mokujin is a training dummy made from a 2000 year old oak tree. Mokujin has been kept in a museum for a long time, but when the God of Fighting (Ogre) awoke, it gained self-identity and started to act on its own. Some people say it is motivated by the desire to help martial artists, and only God and Mokujin know for sure. 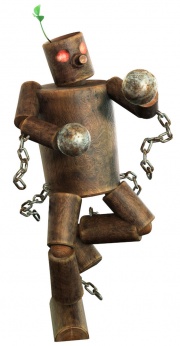 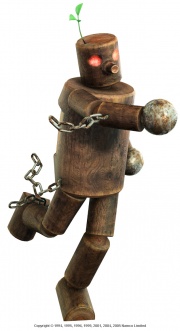 Prologue (In-Game Text)
Mokujin was a wooden dummy made from white oak that was used to train martial artists. Mokujin started to move all of a sudden two years ago, but ceased moving after Ogre was defeated by Jin Kazama. When returned to the museum, Mokujin's face seemed to be smiling. Once again, Mokujin has started to move upon the emergence of a powerful entity... Will Mokujin ever be free?

Interludes (Unofficial Synopsis)
Stage 4, Roger Jr.: Mokujin meets Roger Jr. and his mother at the Waterfall. Mokujin asks if Roger's mother has seen any of its children. Roger's mother replies saying that she will help it if it beats her. Mokujin then states that she wouldn't be able to help, since she can't talk. Roger's mother states that she's the one who wears pants in the family. In the end, Mokujin defeats Roger Jr. apologizing for it and saying that something terrible lies at the end of this Tournament.
Final Stage, Jinpachi Mishima: Mokujin walks through Final Stage 2. Jinpachi (in human form) walks up behind it and says, "I'm impressed that you've made it this far. I am Jinpachi Mishima. My goal... My goal is to destroy all existence!" Shortly after Jinpachi starts to speak, Mokujin turns around and notices him. After he finishes speaking, Jinpachi transforms into his "Devil" form.

Ending (Unofficial Synopsis)
Mokujin has defeated Jinpachi. With the defeat of the force that awakened him, Mokujin falls to ground, lifeless. A column of light then shoots from the sky onto Mokujin, and a small leaf sprouts on his nose. 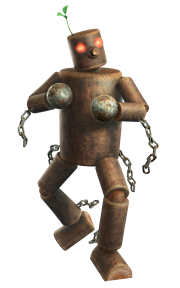 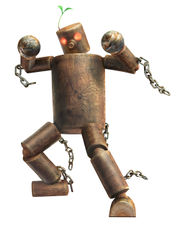 Prologue (In-Game Text)
Mokujin is a training dummy made from a 2,000-year-old oak tree. Sensing evil's presence, Mokujin once again sets out to save the world.

Ending(Unofficial Synopsis)
A woman is narrating what seems to be a fairytale like rendition of Mokujin's journey to defeating Azazel. It seemed light-hearted at first as it sees Mokujin "crossing mountains, oceans and deserts" all while driving a car. Finally he meets Azazel (referred to as the Dark Lord in this ending) and defeats him. In the end, the light-hearted tone of the ending was twisted: Mokujin is seen sitting on a throne with other Mokujin saluting him, a parody of Jin Kazama's Tekken 5 ending. 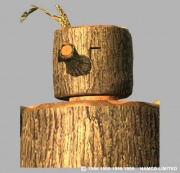 Ending (Unofficial Synopsis)
Mokujin and Tetsujin are practicing moves that is very identical to Northern Style Wushu with many other Mokujin. Mokujin, Tetsujin and the other Mokujin perform all of their moves in unison. This ending animation ends with Mokujin/Tetsujin and the Mokujin pointing at the screen. This ending takes place in Forest Law's second Tekken Tag Tournament stage, which is called "Law-B". 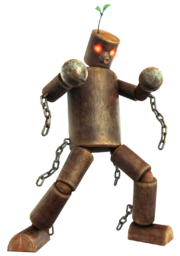 Mokujin is a wooden training dummy made from a 2000 year-old oak tree. Sensing a lurking evil, Mokujin has awakened again to save the world[2].

Mokujin wins a tour of the Namco Bandai headquarters. At the reception desk, Mokujin meets the female Mokujin (which is Mokujin's Player 2 outfit) and falls in love and participates in many activities with her. Later, the female Mokujin wants to give Mokujin a letter saying "I love you" however Mokujin is missing and when the female Mokujin finds him, she gets angry because he is impressing other women and punches him out of the building. 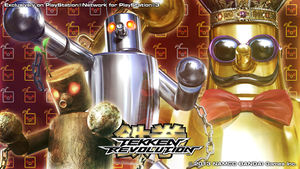 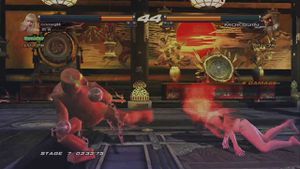 Mokujin is featured in the "Arcade Battle" mode of Tekken Revolution, as a randomly occurring sub-boss at Stage 7. This happens rarely, except during the "Mokujin Festival" updates, where his appearances will be more frequent, to the point where he can show up multiple times in one playthrough. He also has his own mode in this game, dubbed "Mokujin Rush", where the player battles an onslaught of Mokujin, Tetsujin, and Kinjin. It can be accessed with either a Mokujin Ticket, a Premium Ticket, or a Premium Coin. However, this mode comes and goes, lasting for a limited time only.

Retrieved from "http://eng.tekkenpedia.com/index.php?title=Mokujin&oldid=82700"
Categories:
Login to remove all ads