Extremely ruthless when dealing with his motherland's enemies, Dragunov was dubbed, "The White Angel of Death", for not only his fighting prowess, but also for his frightening presence within battle. Well feared, Dragunov was part of Russia's Special Operations unit, or SPETSNAZ, and could utilize not only his Sambo skills, but also multiple types of firearms such as guns loaded with tear gas, and even grenades. He loyally follows his orders and carries them out without hesitation. Prior to the appearance of an unknown entity, Dragunov was constantly at odds with Raven, during one of their battles, Dragunov would wound Raven, causing the man to have the cross shaped scar on his face. His frightening reputation was even mentioned by Zafina, hinting a previous encounter between the two. Eventually, Dragunov enters the fifth tournament in order to find the mysterious entity sighted by his leaders, but comes up short. With the Mishima Zaibatsu waging war against the world, Dragunov was sent to apprehend its leader, Jin Kazama.

Incredibly stoic, Dragunov will almost never show emotion, but this does not deter him from snarking over Raven's mistakes. As a fearsome soldier, Dragunov has incredible perception skills, as well as an extremely professional and intimidating presence. He is most well-known for his incredible silence, not speaking a single word of dialogue to nearly every character. One thing that has characterized Dragunov well is his ongoing rivalry with Raven. The two have fought long and hard against each other, and the two are very well bitter against the other's tactics.

His title is The White Angel of Death.

Prologue (In-Game Text)
A frozen land buried in dense sub-arctic forests. While undergoing geological research in preparation for the development of natural resources, an anomalous object is discovered below the permafrost. The military quickly calls special forces into action and the entire area is completely sealed off. The mysterious object is then transferred under absolute secrecy to a research facility for further study. A month later, military headquarters receive an investigative report regarding the mysterious object and decides to order one of the men working at the dig on a clandestine mission. That man was Dragunov, a member of an elite special forces team who is feared in battlefronts throughout the world as The White Angel of Death. He acknowledges the mission with a silent nod and leaves for Japan.

Interludes (Unofficial Synopsis)
Stage 4 Raven: Dragunov is walking through the Wolve's Den stage. An unseen person says, "So you're...". Hearing this, Dragunov turns his head slightly. The person is revealed to be Raven, who has his arms crossed. While Dragunov turns around to face Raven, Raven continues talking, saying, "I'm on to you and your organization. Give up and go back to Russia." The camera zooms in on Dragunov's face, as he simply moves his head down and to the left slightly, then moves his head back up. Raven, who still has his arms crossed, says, "Prepare to die." After Dragunov wins the fight, Raven is shown laying on his back on the ground. Dragunov puts one of his feet on Raven's chest, and then he starts clenching one of his hands into a fist slowly while the camera is zoomed in on him.
Stage 8 Devil Jin: Dragunov walks up to Devil Jin in the Winter Palace stage. Devil Jin tells him to leave. Dragunov looks at a photo. The camera zooms in on this photo to show what it is. It appears to be an image of Devil Jin that was taken from his Tekken 5 ending ([2]). Dragunov lowers the hand that he is holding the photo with so that it is at his side. Then, Dragunov looks at Devil Jin. After Dragunov wins the fight, a closeup of Dragunov's face is shown as he is walking away from the place. The camera zooms lower and lower to show that Dragunov is dragging an unconscious Devil Jin with him by the horns. 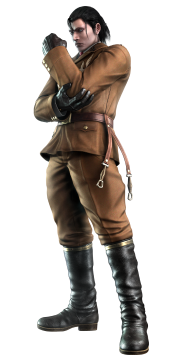 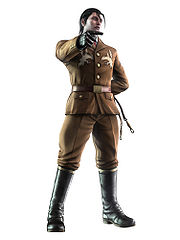 Prologue (In-Game Text)
Sergei Dragunov received orders from Russian Military Command to capture the organism known as the 'Devil' In pursuit of his mission, he successfully infiltrated The King of Iron Fist Tournament 5, but was unable to locate the organism. Russia was in complete disorder with rampant civil disturbances, all believed to be caused by the covert actions of Mishima Zaibatsu operatives. Commissioned to suppress national unrest, Dragunov spent quite some time fighting across the country. Without any hesitation to stop the Mishima Zaibatsu of intruding the Russian government, the leaders decided to overthrow their leader, Jin Kazama, and decided to put a bounty on his head before anything may go worst.He was eventually called back by the Russian military and ordered to infiltrate The King of Iron Fist Tournament 6 to crush the Mishima Zaibatsu. Dragunov embarked once again for Japan.

Ending (Unofficial Synopsis)
The Russian military have Azazel captured and Dragunov signals them to haul it in. Suddenly, a plane shows up and Raven jumps from it, extracting a magenta-colored orb out of Azazel. He then makes his escape back to the plane with the soldiers shooting at it. But Dragunov had slipped a charge on the plane and detonates it. 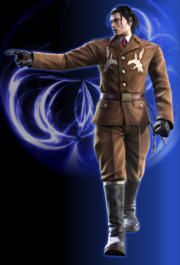 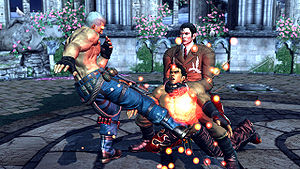 Dragunov and Bryan performing a double team move on Jin.

Sergei Dragunov will be featured as a playable character in Tekken Tag Tournament 2, a non-canonical Tekken game.

Dragunov will be featured as a playable character in Tekken Tag Tournament 2.

Part of a military special unit, Dragunov has earned a fearsome reputation in numerous battlefields , and the nickname "White Death" for crushing skills in combat. Russia was in complete disorder due to numerous internal conflicts and civil disturbances, all believed to be caused by the covert actions of Mishima Zaibatsu operatives. In order to suppress national unrest, Dragunov fought across the country, but was then called back by top Russian military command and ordered to crush the Mishima Zaibatsu[1].

Dragunov is seen going into a room with a box from Doctor Bosconovitch. The box reveals the parts for assembling Alisa along with an instruction manual. Dragunov first put Alisa's body on her legs, but just as he is about to put the head on the neck, the chest falls of. Dragunov decides to put Alisa's head on her hips for the moment while assembling the chainsaws for her arms. He attaches the wings to the chest only to be blown back for a minute. He later realizes that Alisa's head is stuck on her hips, and decides to read the manual once again after finding a button in the leg. He soon decides to push the button, which ends with an explosion in Dragunov's room

Dragunov is featured in the free-to-play online game Tekken Revolution as an unlockable character, added in the July 16, 2013 update ([6]). As with the rest of the cast, his appearance and moveset are carried over directly from Tekken Tag Tournament 2, with the addition of a new "Invincible" move.

Dragunov appears in the Tekken Movie as a Russian fighter. Unfortunately for him, he was killed by Bryan Fury during the semi-finals of the tournament when Kazuya ordered the competitors fight to the death.