This article is about the second Kuma. For the first, see Kuma I.

Kuma (クマ, lit. "Bear") was first introduced in Tekken 3, and returned for all subsequent games. He replaced his father, starting with the third tournament.

Continuing his father's rivalry, Kuma would inherit his father's rival, Paul Phoenix, and the two would continue on fighting each other, carrying on from the original Kuma. Upon his loss in the third tournament however, he realized the necessity of taking his training to another level. Through this, he immediately left the Mishima Estate in order to train in the wilderness. Described as the harshest training regimen he received, Kuma pushed himself to limits with the wild, but his addiction to television would lead him to the announcement of the fourth tournament, and his inevitable match with Paul once more.

In the fourth tournament, he finally achieved victory over Paul, but much to the bear's surprise, Heihachi was no longer in control of the zaibatsu, leading to Kuma's desire to reclaim the corporation for his master. In the process, he would fight with Paul once more, this time on the losing end. Despite his loss, Kuma still continued to the corporation's headquarters. Surprisingly, he would meet it's new head, Jin Kazama, and he was immediately banished to the Hokkaido wilderness. Burning with a new rage, Kuma immediately set out with the desire to defeat Jin.

Kuma is considerably more of a joke character compared to Panda and his father. It is unknown how he met Panda (presumably when Heihachi was teaching them Kuma Shin Ken), but he has always had a very unrequited but humorous love for her. This jokingly leaves him on the receiving end of her attacks, and the concern of her owner, Xiaoyu.

Despite leaving him in the fourth tournament, Kuma is still devoted and loyal to Heihachi, though, in recent adaptations, Kuma and Heihachi's love for one another has been put into question. The first example occurred in Tekken 4 when Heihachi attempted to cheat Kuma out of the Zaibatsu in his ending.

His title in the original trilogy is Raging Bear. 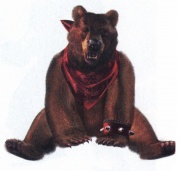 This Kuma is smarter than its father, and a good bodyguard for Heihachi. One day, when it was absorbed in watching TV, it suddenly went wild at the sight of a martial artist with a scarlet go-gi. It was Paul Phoenix!

Kuma has trained since that day to defeat Paul in battle. It doesn't think anything of the God of Fighting, only of defeating Paul.

By the way, Kuma is secretly in love with Xiaoyu's Panda.

Ending (Unofficial Synopsis)
Kuma is waiting outside of the gate of Mishima Polytechnical School. Ling Xiaoyu and Panda are leaving the building. As they walk out of the gate, Kuma offers Panda a bouquet of flowers; Panda, however, has not noticed and continues to walk past him with Xiaoyu. Kuma continues to stand there, even until the end of the scene.

Prologue (In-Game Text)
After losing to Paul Phoenix in the last Tournament, Kuma realized that he had lost touch with his animal roots. As long as he was Heihachi's pet, he would be unable to harness the power of his natural instincts, no matter how much he trained. Determined to revive his wild instincts, Kuma trained by himself in the mountains of Hokkaido (a northern island of Japan). Life in the wilderness was more brutal than any training Kuma went through with Heihachi. Despite this, Kuma continued his harsh regimen because he burned with the desire to defeat Paul. His efforts paid off- his skills improved dramatically to the point where he developed his own attacks. One thing Kuma could not get rid of, however, was his habit for watching television. He went down to the village every so often to watch TV through the windows of the villagers' houses, much to the surprise of the villagers. After waking from hibernation during his second year of training, Kuma went down to the village as usual to watch some TV. When he looked through the window of one house, he saw a commercial announcing The King of Iron Fist Tournament 4. Kuma's instincts raged for battle, and he headed for the tournament site. Paul would be at the Tournament without a doubt, and Kuma was determined to defeat him.

Ending (Unofficial Synopsis)
Kuma has won the Tournament and the Mishima Zaibatsu. During a ceremony, Kuma is signing some documents (by placing his paw print on it) that will officially hand the Zaibatsu to him (the documents have pictures of Heihachi's head with an arrow pointing to Kuma's head). The last paper is just the opposite of all the others; when Kuma reaches it, Heihachi smiles, as this means that Heihachi will get the Zaibatsu back from Kuma. Kuma, realizing this, places his paw mark on Heihachi's face rather than on the document, thus outsmarting Heihachi. 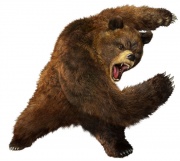 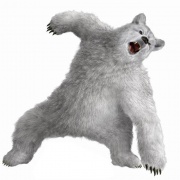 Prologue (In-Game Text)
Kuma, loyal pet of Heihachi. Kuma finally defeated Paul in the King of Iron Fist Tournament 4. However, his master Heihachi was dead. Kuma was alone without Heihachi. Then he realized the Mishima Zaibatsu was in trouble he knew what he must do "Grr! (I Must save the Zaibatsu!)" When Kuma reached headquarters he heard someone was taken controll and announced the King of Iron Fist Tournament 5. Kuma vows revenge to save the Zaibatsu for his master and enters the tournament.

Interludes (Unofficial Synopsis)
Stage 4 Ling Xiaoyu: Kuma fights Xiaoyu who tells him to move on. Kuma wins and claims it was because of the "power of love" before running to save the Mishima Zaibatsu.
Stage 7 Paul Phoenix: Kuma meets Paul and asks him to leave before defeating Paul who yells "dammit."
Final Stage Jinpachi Mishima: Kuma walks through Final Stage 2. Jinpachi (in human form) walks up behind him and says, "I'm impressed that you've made it this far. I am Jinpachi Mishima. My goal... My goal is to destroy all existence!" Shortly after Jinpachi starts to speak, Kuma turns around and notices him. After he finishes speaking, Jinpachi transforms into his "Devil" form.

Ending (Unofficial Synopsis)
Kuma is reading something on a piece of paper. After he finishes reading it, he places his paw print on it. Suddenly, Lee Chaolan runs into the room and says that Heihachi Mishima wishes to see him. Lee asks Kuma how he would like to proceed. Kuma replies, "Bring him here". Lee allows Heihachi to enter the room. Heihachi enters the room and congratulates him for protecting the Mishima Zaibatsu for him. A couple of seconds later, a closeup of Kuma's eyes is shown. Kuma presses a circular red button on his desk. A trapdoor opens underneath Heihachi, and Heihachi falls down into the hole. Lee gives Kuma a "thumbs-up" gesture with one of his hands. Then, one of Kuma's servants offers him a fish. Kuma opens his mouth to eat the fish, but before Kuma can eat the fish, Heihachi manages to climb back up the hole and press a triangular blue button that is right next to the circular red button, sending Kuma, his chair, and his fish into the hole. Heihachi begins to climb out of the hole, saying, "Damn Kuma and his worthless hide... As long as there's a breath left in my body, I won't let you do as you please!" Lee gives Heihachi Mishima a "thumbs-up" gesture with one of his hands. 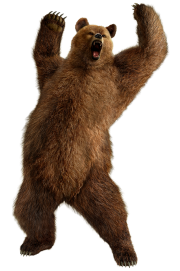 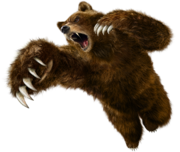 Ending (Unofficial Synopsis)
Kuma has tied up Jin and Kazuya in a rocket. He succeeds in letting the both into outer space. Kuma starts to cheer while moving his hands up and down causing him to put a hole in his spacesuit causing him to fly into outer space along with Jin and Kazuya. The trio catches on fire because of gravity and plunge into the Earth while they turn into sparkles. Ganryu is then seen watching them. 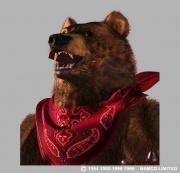 If teamed with Heihachi Mishima, Kuma and Panda will be able to perform Heihachi's "Demon's Boar (b+2)" move.

Ending
Heihachi Mishima sits on the ground and claps his hands together while Kuma dances. They are in Jin Kazama's second Tekken Tag Tournament stage (the stage is called "Jin-B"). 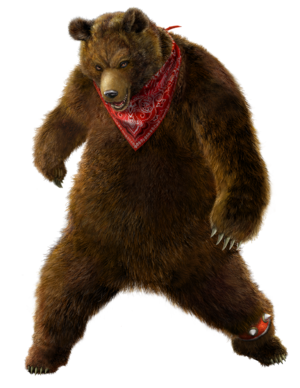 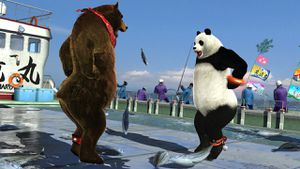 Kuma will be featured as a playable character in Tekken Tag Tournament 2.

First his late father, and now Kuma is Heihachi Mishima's loyal pet and bodyguard. He has a fierce rivalry against Paul Phoenix through the King of Iron Fist Tournament. His loyalty to Heihachi drives him to want to save the Mishima Zaibatsu, so he's currently trying to reclaim it from Jin Kazama[1].

Kuma is seen taking poses with two girls from Mishima Polytechnic in an amusement park. While enjoying his time, and not minding the girls' comments that Kuma was actually just a guy in a costume rather than a real bear, Kuma soon spots Panda. He goes on a rampage in the amusement park, looking for her. Though he finds her, Panda promptly knocks out Kuma. As soon as he wakes up, Kuma then grabs a panda, but it simply turns out to be a man in a panda suit. He then cries loudly in failure as the terrified man runs away in fear. 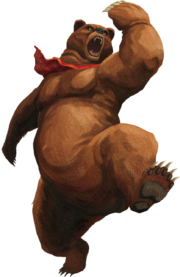 A ferocious bear who uses a variation of the Heihachi Mishima style of karate. He is more than a mere pet to Heihachi, and stands as sort of a partner with him. When Jin was in control of the Mishima Zaibatsu, Kuma rescued the company in Heihachi's stead. He has also sat on the Mishima Zaibatsu's board of directors but lost control of the leadership to Jin. Filled with the desire for revenge, he reunites with his master Heihachi and heads to the Antarctic.

After Heihachi learns that both Kazuya and Jin are headed to the Antarctic in pursuit of Pandora, he devises a plot to foil both their plans. However, Heihachi also learns that Pandora will only react when a large number of powerful fighters begin to fight amongst each other. Heihachi worries about finding fighters who could match him in strength in order to trigger a reaction. Then without warning, Kuma, who is also trying to control the Mishima Zaibatsu, shows up.

Heihachi: Kuma! I didn't realize you were here!

Kuma: (H-Heihachi! It was you all along!)

Heihachi: It's been too long, friend!

While infuriated with Jin's actions, Kuma is pleased at the sight of his old master, and decides to travel with him.

Heihachi: When the dust settles, I shall be victorious!

As Heihachi and Kuma walk they see Guile (whose hair, Heihachi remarks is weird) and Abel. As Guile and Abel notice them, they start walking towards them with Abel giving Kuma a strange stare. Heihachi decides to take them down before moving on.

Heihachi and Kuma now walk away from a defeated Akuma and try to open the box. Kuma starts hitting Heihachi reminding him that they're splitting the box's contents but Heihachi says that he would only give 10% if it was possible except if it granted power or youth. When Heihachi finally opens the box Kuma hits the box and a giant flash appears. Shortly after Heihachi spots Kuma, now a cub and realizes that only a small portion of his hair was young and shouts that it isn't fair.

Kuma is featured in the free-to-play online game Tekken Revolution as an unlockable character, added in the September 4, 2013 update ([5]). As with the rest of the cast, his appearance and moveset are carried over directly from Tekken Tag Tournament 2. However, his "Fatal Wind" (b,B+2+3) is strangely absent in this game, which makes him the only character to lose a move so far.